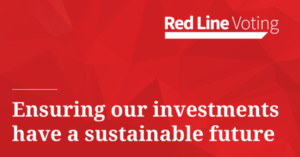 The Pensions Regulator (TPR) has implicitly endorsed the Red Line Voting initiative, an ESG stewardship initiative designed by the Association of Member Nominated Trustees (AMNT) to encourage asset owners to take a more active approach to exert their voting rights in pooled funds.

According to figures by the Investment Association, about half of the UK’s total assets under management (£2.5 out of $5trn) is in those pooled funds, in which most pension schemes invest.

The AMNT launched the RLV initiative in 2015, believing managers have been generally reluctant to allow investors in those funds to have a say on how their votes should be cast.

Speaking at a recent event hosted by pensions body the Pensions and Lifetime Savings Association (PLSA), TPR Policy Analyst Amanda Latham said it was “quite disappointing” that such an initiative hasn’t had greater take-up from fund managers.

Latham said that from the TPR’s perspective, as a regulator that endeavours to ensure there are strong trustees who are able to hold asset managers to account, the RLV is the kind of initiative one would expect.

The slow take-up of the initiative, she said, reflected the information and power asymmetry in the market.

She was answering a question from the floor put by WHEB Asset Management’s Managing Partner George Latham (no relation).

He asked panellists why a project based on accepted governance codes and on a comply or explain basis has struggled to gain traction.

He asked: “Why is it been so difficult to use that as a catalyst for engineering a conversation between fund managers and asset owners about how they vote and why? It seems like a good starting point.”

He said the AMNT initiative was labelled “nonsensical” at a recent event attended by corporate governance experts at asset managers.

Hildyard said that a fund manager might have good reasons to not necessarily implement the RVL but, he continued, it is good commercial practice to explain why some of the red lines might not be applicable, “rather than just dismissing it as something ill-informed from clients who don’t really know what they are doing”.

Hildyard added: “I think it is sort of a failure of the asset managers to dismiss it.”WHEB is among the few asset managers that apply the RVL. Latham told RI that they have developed their own version to roll it out beyond the UK holdings.

Following up on his question at the PLSA event, he said the fund management community has slightly ignored the comply or explain aspect of the initiative. He said “the administrative costs of this idea of differential voting on pooled funds” had created a kind of “blanket resistance”.

He added: “Asset owners hold the key to this,” implying he would have expected more from them to encourage it.

Leanne Clements, RLV Campaign Manager at the AMNT, told RI: “Asset owners get charged with not sending a strong enough signal to the fund managers on their ESG expectations. But when attempts are made, some fund managers are not willing to implement bespoke responsible investment policies, such as Red Line Voting.”

It is not the first time that TPR has raised awareness on ESG factors among asset owners.

Lesley Titcomb, TPR’s CEO, said last year that “ESG cannot be ignored” when releasing guidance for the defined benefit space, which stated it expects trustees to assess the financial materiality of such factors.

Andrew Warwick-Thompson, TPR’s former Executive Director for Regulatory Policy (currently CEO of the LGPS Central Limited), is on the record saying about these expectations from trustees:

“I would urge any trustee or asset manager out there who thinks that these things don’t matter to wake up and smell the coffee. We need to guard against complacency here.”

The AMNT’s Clements added: “If these problems continue in light of this new regulatory environment, the asset owner will be left with responsible investment policies driven by what the TPR has asked of them, but with an inability to implement them. This represents an impasse that needs to be addressed.”

Asked about its views on the RLV, the Investment Association – the fund management trade body – declined to comment.

Asked whether the RVL can help signatories of the Stewardship Code to comply with principles such as having “a clear policy on voting and disclosure of voting activity”, the Financial Reporting Council did not reply at the time of writing.