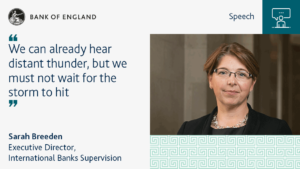 The Bank of England has warned of a rapid adjustment of asset prices, known as a Minsky moment, due to climate risks – but said disinvestment is not the solution.

It comes as the International Monetary Fund has separately raised the spectre of climate-related “fire sales”.

But she went on to say: ““Speaking personally, I cannot see that we will be able to disinvest our way to a low carbon economy.” Rather, we needed to have a “better basis for consistent comparisons across different firms”.

She was speaking at the Official Monetary & Financial Institutions Forum, marking the launch of a policy statement Enhancing banks’ and insurers’ approaches to managing the financial risks from climate change.

She made the point that the risks are “far-reaching in breadth and scope. They will affect all agents in the economy, in all sectors and across all geographies. Their impact will likely be correlated, and non-linear. They will therefore occur on a much greater scale than other risks.”

The “non-linear” climate risks warning was also issued at a different event yesterday by the International Monetary Fund.

“The complexity of climate risks leads economists and climate scientists into areas that are deeply challenging,” said Tobias Adrian, Director of the Monetary and Capital Markets Department at the IMF.

“The risks of a climate catastrophe have significant breadth, since they affect most business models, sectors, and geographies. They are large, potentially non-linear, and irreversible. They are only partly foreseeable, they depend on short-term actions, and their time horizon is long and uncertain.” He was speaking at an event — Stress-Testing for the Transition to a Low-Carbon Economy – with the Dutch central bank.

He also spoke of rapid asset price swings: “A key next step will be to capture second-round effects — in which a decline in asset prices leads to fire sales, which further depress asset prices, generating a vicious cycle and an amplifying mechanism for an initial shock.”He went on to say: “Preliminary attempts at quantifying second-round effects suggest that they can be sizeable. It will be essential to fill data gaps — for example, on the industry classification of investment funds’ ultimate exposures.”

Adrian said the IMF’s focus has been on carbon pricing but said that, given the IMF’s focus on countries’ financial stability, it needed to be alert to climate-related risks.

“We are liaising with central banks and other agencies, and we are working to enhance our analysis of macrofinancial transmission of climate risks, including through stress tests.”

Last week, speaking at the launch of the Global Financial Stability Report, Adrian said the IMF was ready to provide help to countries that are hit by adverse climate shocks.

Meanwhile, group of finance ministers from more than 20 countries have launched a new coalition aimed at driving stronger collective action on climate change and its impacts.

They have backed six principles, dubbed the Helsinki Principles, including alignment with the Paris agreement and taking climate change into account in “macroeconomic policy, fiscal planning, budgeting, public investment management, and procurement”. They also pledged to mobilize private sources of climate finance.

All this top-level climate warning is in the context of events such as the Extinction Rebellion movement taking to the streets worldwide and the emergence of schoolgirl climate activist Greta Thunberg, who was speaking at the European Parliament today.

At the investor level, Legal & General Investment Management is also now using the term “climate catastrophe”, while GMO’s Jeremy Grantham and Lucas White have released a paper called Think Outside the Box that looks at the hows and whys of climate investment.