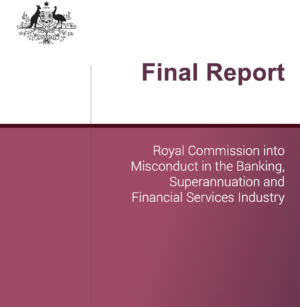 In the weeks since the release of the Banking Royal Commission’s final report [chaired by Kenneth Hayne], much has been written about the failures of governance, unethical leadership culture and possible criminal proceedings facing household names in the Australian financial services industry. Commentators from both within finance and the media have been quick to blame the Big Four for their greed and profiteering in the face of mounting reputational risk. But while there has been a tide of finger-pointing against these institutions, only a handful have discussed the role of Responsible Investment (RI) in contributing to – or combatting – some of the issues that have emerged. As the financial services industry reflects on the consequences of the inquiry, should RI investors be asking why we didn’t see this coming? What do the findings of the Royal Banking Commission mean from an environmental, social and governance (ESG) perspective? When reviewing these issues through such a lens, distinct and interrelated questions emerge.

How does an RI investor identify a culture of unethical leadership?
The failure of an institution’s culture to respect and uphold its social licence to operate has been an overarching theme of the many scandals highlighted through the Commission. Hayne noted repeatedly that the lack of ethical culture embedded in an institution through the example of its leaders was an ‘endemic problem’ and a ‘failure of governance’ across the industry. Specifically, he raised the issue of non-financial metrics being treated like a box-ticking exercise, speaking directly to some of the core tenets of RI and ESG. [1]

These findings raise the question: How do responsible investors detect unethical culture in an investee company, and how can this approach be strengthened? Company engagement and shareholder resolutions are common mediums through which issues regarding company culture and non-financial metrics are addressed by investors. Are responsible investors wielding the power they have in these spaces?

Professor Elizabeth Sheedy from Macquarie University’s Applied Finance Centre does not think so: “The banks are appointed by shareholders. If the shareholders are happy, why would you change? If we started to see some really significant fines so the shareholders started to feel some pain and returns suffered, that might create impetus to do something differently”.[ii]

Many of the companies defending themselves in front of the Commission have achieved strong ESG ratings with regards to their overall business. While the inclusion of ESG controversies can decrease their overall ranking, a question exists of whether the standards of ESG expected by responsible investors are rigorous enough, and can be met whilst still maintaining loopholes of risk that can be exploited by those in leadership.

In response to the findings regarding cultural failings at Big Four bank NAB, the (now departing) CEO Andrew Thorburn noted, “…we at NAB may not be learning the lessons we need to from the past and, in particular, that we don’t know what the right thing to do is.”[iii] To responsible investors, such statements should represent the pinnacle of governance failure. They also raise the question of whether we as investors may have a greater role to play in equipping investee companies with ESG guidance. Could these failures have been avoided if investors had acted sooner? What form could this intervention have taken?

Some investors are not waiting for the next scandal before acting. Australian Ethical sold $8m of shares in AMP, citing systemic prudential and cultural issues exposed by the inquiry. [iv]*How is RI failing to undertake necessary due diligence on remuneration reports?*
The analysis of remuneration reports typically occupies a large proportion of an investor’s time during proxy season. As such, it is a concern that the Hayne report consistently found remuneration to be the driver of much of the misleading and unethical behaviour, and a disregard for non-financial metrics to be a contributor to overall failures of governance systems.

According to Brynn O’Brien of the Australasian Centre for Corporate Responsibility, investors should have absolutely seen this coming: “It is ludicrous that it took a Royal Commission for institutional investors to collectively vote against remuneration packages and, in the case of AMP, directors. Corporate democracy is weak if those in positions of power do not use the accountability tools available to them. Large investors should have taken action much sooner across the financial services sector.”[vi]

Are responsible investors failing in their assessment of remuneration reports? How can we ensure that non-financial metrics or not only measured but relevant? Have investors become disengaged from applying consistent rigor in analysing the remuneration packages of well-performing investee companies? These questions and more underlie the findings of the report: that remuneration incentives are the source of ‘just about all the unethical and illegal problems identified during questioning’.[vii]

Given that the recommendations of the report create no explicit requirements for companies regarding these issues, the responsibility to address this risk lies squarely with investors and the regulator. With the next proxy season six months away, now is the time for investors to go back to the drawing board and find the potential gaps in their assessment.Can responsible investors trust regulators to close the gap?
The Hayne report calls for APRA to rewrite prudential standards on remuneration in order to encourage banks to incentivise the appropriate management of non-financial risks.[viii] However, the report also noted deficiencies at APRA, citing that it had been acting as a ‘hear no evil, see no evil’ regulator. The Productivity Commission’s draft report into super furthered such concerns, finding that APRA had taken no action even after one in two super funds persistently underperformed over a period of 12 years.[ix]

Separately, ASIC was criticised for avoiding court action on companies that broke the law and relying instead on administrative and negotiated sanctions as an enforcement tool. ASIC has responded to these criticisms by adopting a ‘why not litigate?’ approach, with a 15% increase in investigations underway and a 50% increase in the number of investigations of misconduct by large financial institutions since the start of the inquiry. But some observers have noted that this could slow down court processes rather than speed up accountability.[x]

Under these circumstances, RI investors must either trust that these regulators can rise to the challenge of enforcing corporate accountability, or proactively engage in advocacy on issues of corporate governance as an integral aspect of ESG strategy.

The comments of the Hayne report regarding regulators are the latest addition to an overall climate of decreasing trust in Australian public institutions. These occurrences highlight the overwhelming reliance of RI upon such institutions doing their job, and therefore suggest a greater engagement with regulators is paramount to the proper management of ESG risks.

Can RI investors redefine financial risks in an era of ‘why not litigate?’
As ASIC proceeds into further investigations with an increased propensity towards litigation, and law firms prepare to sue banks over misconduct, financial institutions are said to be facing years of litigation. ASIC has estimated that the costs to the industry due to NAB’s ‘fees for no service’ scandal alone could exceed $1billion. Coupled with mounting legal cases being pursued by firms such as Maurice Blackburn and Slater & Gordon, and the expectation of increased fines under the Banking Executive Accountability Regime, this figure may be a modest starting point.[xi]

In such a climate, responsible investors are witnessing first-hand the impact of ESG risks on hard financial outcomes. Governance failures, both current and historic, threaten to accrue into material portfolio impacts, leaving the RI community with a potential watershed ‘I told you so’ moment.

Could this represent an opportunity for responsible investors? Is it time to speak up and redefine the meaning of financial risk to a new national audience?

While ESG has enjoyed minor elevations into regulatory guidance in the last decade – e.g. through the reputational risk, climate change and gender diversity requirements of the ASX Corporate Governance Council’s 4th edition and the Task Force on Climate-related Financial Disclosures – it has failed to penetrate the superannuation stalwart of the Sole Purpose Test, which continues to sustain a pure profit-based modus operandi despite the best intentions of ESG integration.The question is therefore: what will responsible investors make of the bittersweet opportunity offered by the findings of the Royal Banking Commission? And what does a new era of ESG look like as we stand among the ashes of so many failed endeavours?

One way to begin the process, as with any site of destruction, is to understand what can be salvaged and what must be thrown away. That is, how do we distinguish between lip-service and genuine, effective change within our own ESG approaches?

It is likely that as the string of prosecutions play out in the public arena, the RI community will be tasked with reflecting upon its own practice. As it does, the Australian RI industry – which has traditionally been at the forefront of thought leadership and innovation – has a unique opportunity to apply the hard-won lessons and question their own beliefs, investment teams, proxy advisers and research providers, to decipher what went wrong and what we need to do differently.