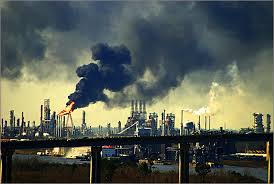 The £2.3bn UK Environment Agency Pension Fund (EAPF), has become one of the world’s first pension funds to review its investment portfolios to examine the danger of ‘stranded assets’, the risk that investors could face being exposed to overvalued fossil fuel assets in the event of rapid regulation by governments to regulate carbon emissions to limit global warming to a 2°C rise in temperature. The review carried out by Trucost, the environmental data company, measured the relative exposure to fossil fuel extractives companies compared to their benchmark index for sixteen of the fund’s investment portfolios, both in active and passive listed equities, representing over two thirds of the £2.3bn fund. This produced an ‘embedded carbon’ result for each. For the EAPF’s investment portfolios the measurement was the portion of holdings in fossil fuel extractives companies as a proportion of total portfolio value. The figure for benchmark indices was the aggregated market capitalisations of the constituent fossil fuel extractives companies as a proportion of total benchmark value. Each portfolio’s exposure was compared to its appropriate benchmark. Trucost found that active portfolios were significantly less exposed to embedded carbon and none of the portfolios were significantly more exposed to embedded carbon stores than their benchmark index. The EAPF has a strategy of appointing sustainability orientated external fund managers. The data found that the EAPF’s most highly exposed active portfolio had an exposure of 13.8%. The same fund had an embedded carbon exposure 45.2% less than the FTSE 100 benchmark, although it was more exposed than the MSCI All World index.
The concept of fossil fuel ‘stranded assets’ was first highlighted in 2011 by Carbon Tracker’s ‘Unburnable Carbon’ report, which developed the investment thesis that to avoid catastrophic climate change impacts the majority of fossil fuel reserves listed on global stock markets would be ‘unburnable’. As a result, it said stranded assets would suffer unanticipated or premature write-offs, downward valuations, or be converted to liabilities.In its report, Trucost recommended that the EAPF should lobby legislators and reporting bodies to advance standardised disclosure of fossil fuel reserves data in public corporate reports. It said it should also engage with fossil fuel companies on their capital expenditure programmes (CAPEX) for the development of new fossil fuel reserves, as well as their prospective strategies to drive a transformational shift to a low carbon economy.
Contrary to a number of campaigns that have called for institutional investors to divest fossil fuel companies to avert climate change, Trucost said EAPF should not sell its investment exposures in order to “maintain influence” over fossil fuel companies: “Reducing investment exposure to the fossil industry does not precipitate a reduced prevalence of that industry. Be part of the conversation to influence the discussion,” it said.
Faith Ward, Chief Responsible Investment and Risk Officer at the Environment Agency Pension Fund said: “The EAPF has made considerable progress in addressing climate risk, but there are still opportunities to further reduce the financial risk to the portfolio and potentially increase the returns of the fund as a shareholder. Based on Trucost’s recommendations, we have identified key actions of implementation and will publish progress against these actions via our website (www.eapf.org.uk) and in our annual report and accounts.”
A high-level workshop last year organised by Canada’s Rotman International Centre for Pension Management and Al Gore’s Generation Foundation, recommended that institutional investors seek out effective collaborations with like-minded organizations to manage the risk of stranded assets.
A report last year by the Smith School at the University of Oxford warned of stranded assets in the agriculture sector as a result of climate change.
Link to Trucost report for EAPF