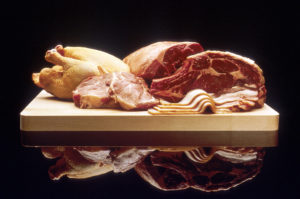 This article is one of a four-part series on ESG Frontiers published by Responsible Investor (RI) with other pieces on AI, Agriculture and Student Loans. Click here to sign up for a free, no-strings trial to RI to read them.

It’s high emitting, rapacious in terms of water and land use and with potentially catastrophic implications for both the efficacy of antibiotics and the world’s forests.
The impacts of the meat sector are vast – to say nothing of the ethical implications of the industry.
And, according to a recent report on meat by consultants AT Kearney, simply improving the efficiency of conventional production methods will not be “enough in the long run to cope with the pressing challenges of our food system”, as the sector outstrips natural thresholds and intensification reaches its limits.
But global demand for meat is still growing, and fast.

‘The meat industry needs to either disrupt itself or be disrupted’ – Brooke Barton, Ceres

The World Resources Institute predicts that there will be a 79% increase in global demand for animal-based foods (meat and dairy) between 2006 and 2050.
Business appears to be booming too; last year, Brazil’s beef behemoth JBS announced record net revenues of $48bn.
Some of the world’s biggest meat processors – including JBS – have, however, recently announced forays into more sustainable plant-based meat alternatives – a sector that UBS estimates will be worth over $85bn in the next 10 years, up from $4.6bn currently.

How much weight should investors give all this? Is this an industry beginning to acknowledge the end of business-as-usual, or simply an attempt to corner a new – but ultimately niche – market?

US giant Tyson Foods is the latest entrant into the alternative protein market with its new Raised & Rooted line.

It followed the Arkansas firm’s sale of its 6.5% stake in Beyond Meat in April.

The success of the California-based vegan burger maker has itself been touted as a watershed moment for the meat-free industry. Beyond Meat’s shares are up more than 800% since its initial public offering in May.

Brooke Barton, Senior Programme Director, Food and Water at US sustainability advocacy group Ceres tells RI that the meat sector needs to “either disrupt itself or be disrupted”.

Historically, she says, markets have rewarded a race by meat producers to produce the highest volumes at the lowest cost.

This has resulted in stock valuations that “typically fail to account for the mounting negative environmental and social externalities (and related risks) generated by the prevailing business model”, she continues.

Barton describes Tyson as a “good case study” of a company that has taken “initial steps” following engagement with investors both in terms of identifying changes in consumer behaviour and listening to investor concerns about the “long-term viability of their existing business model”.

Allan Pearce, Shareholder Advocate at Boston SRI firm Trillium, agrees with Barton that there are “signs” of a transition to more sustainable protein among companies like Tyson.

But he adds that this is opportunistic and not in response to the risks the sector is exposed to.

Robeco’s Senior Engagement Specialist, Peter van der Werf, tempers the optimism about the scale of the potential shift to alternative proteins, saying that tapering demand for meat in developed countries – driven by health and concerns over the environment and animal welfare – is likely to be offset by huge demand in Asia and Africa as affluence rises.Business-as-usual, it seems, is likely for the foreseeable future.

But consultant AT Kearney is confident about the rise of non-conventional sources of protein, particularly cultured meat (i.e. grown artificially from cell cultures), which it predicts will become “a global phenomenon”.

It is backing cultured meat and vegan substitutes to overtake conventional meat by 2040 – with 60% of the $1.8trn market going to the disrupters.

Despite the scale of the challenges facing the industry and questions over its long-term viability, Ceres’ Barton says there are a lot of opportunities for businesses to reduce their impacts “in the near term”. An easy win would be limiting deforestation in supply chains.

Ceres is currently collaborating with the Principles for Responsible Investment (PRI) on an engagement initiative focusing on commodity-driven deforestation, which accounts for approximately 70% of tropical deforestation in Latin America.

The Investor Initiative for Sustainable Forests is backed by around 50 investors representing approximately $6.5trn in assets, engaging with over 20 companies across the soy and cattle value chains.

Earlier this month, Sustainable Investment Management (SIM), the London-based boutique environmental finance firm, announced it would arrange a $1bn green bond to prevent the clearing of Brazil’s grasslands by offering farmers low cost loans, in a programme backed by the UK government and the UN.

Barton also points to exciting technological advances in animal feeds involving seaweed that have been shown to “significantly lower methane emissions” as an avenue companies should be exploring.

But she tells RI that there is room for a lot more engagement by investors with the sector and urges them to make it a priority in their proxy voting guidelines.

Aarti Ramachandran, Head of Research and Engagements at FAIRR, the investor network focused on ESG issues in protein supply chains, also believes that there has been a “general lack of oversight of the meat sector”.

“The fact is that these are large-scale systems of production and unlike similar industrial systems they’ve not had the same environmental and regulatory guardrails,” she says.

FAIRR hosts the Protein Producer Index, which assesses the 60 largest producers of meat, poultry, dairy and aquaculture on their management of nine ESG risk factors, including antibiotics use. It has just released an update on its three-year engagement project with 25 of the world’s biggest food retailers and manufacturers.

Trillium’s Pearce agrees that there has not been enough regulation of the sector to “compliment the work of investors and other stakeholders” and doubts whether it will come soon.

One area that could see regulatory action is antibiotic misuse, says Kyle Kempf, Director of Communications at US SRI investor Green Century, who describes the development of antibiotic-resistant superbugs “as one of the gravest risks the industry – and the world – faces”.

“An astounding 70% of medically important antibiotics in the US are sold for use in livestock, predominantly for prophylactic purposes rather than treatment. The effect superbugs could have on the global economy – and, more importantly, human health – is staggering.”

Ceres’ Barton says investors should be pushing for is more disclosure on emissions and climate risks.

“One of the reasons that it has been a less emphasised industry by investors is because of a lack of understanding of the size of the scope three emissions and the data being quite weak.”

The risks posed by the big meat processers is part of the reason that Trillium doesn’t invest in them and other commodity providers.

“There are just so many environmental and social impacts…I don’t know if a company could manage those risks responsibly enough to make it attractive,” Pearce says.

Instead, Trillium has focused its engagement further along the meat supply chain to where it does have exposure, i.e. retailers and restaurant chains.

Pearce points to encouraging successes with fast food firms like McDonald’s and retail giants such as Walmart, which have both set science based emissions reductions targets and are putting pressure downwards through the supply chains.

In January, Ceres and FAIRR led an investor coalition of 80 investors – including Robeco and Trillium –calling on the world’s six biggest fast food companies to act urgently on the climate and water risks in their supply chains, including setting “tough” targets on emissions and water use.

Could the conventional meat sector ultimately square with a sustainable future? Robeco’s van der Werf says that from a carbon perspective it is “feasible” for some companies to align with a low carbon future and points to those that have set achievable science-based targets.

But he adds that such targets do not address “other externalities” such as deforestation, antibiotic use, water use and management of waste.It is for this reason that selecting companies that are “able to change their model to a sustainable one is so important”, he says.

But Robeco’s van der Werf admits that it is “quite a leap” for a traditional meat producers to transition to alternatives.

Robeco has been engaging with the meat sector since 2016, taking what van der Werf describes as a “full supply chain perspective”.

But Carina Millstone, Executive Director at activist group FeedBack, argues that engaging with the sector is misguided. She says we need to treat the big meat suppliers the same way as fossil fuel firms.

“We need to be clear that we cannot have a sustainable world with these companies on it, with this industry existing, therefore, if that is the starting point, well, what happens next is that we get rid of them, that’s the next logical step.”

Considering the rising demand for meat – even in the face of market disruption – the demise of big meat companies seems unlikely but this is no excuse for them not to seek to become more sustainable, according to Pearce.

“If there is an opportunity to grow and produce meat cheaply and efficiently – which is the terms that they would probably use – we would say fine but you can do that in a more responsible way, you can reduce your impacts, your emissions, your water use.

“Decoupling emissions from the growth of business is something that has been demonstrated by many companies, so I do not see why meat companies couldn’t do the same thing. It might require some investment, some capex, but in the long run it would be worthwhile.”