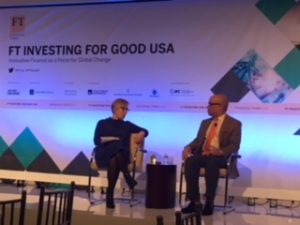 Darren Walker, President of the $13bn Ford Foundation, has urged foundations and impact investors to be “more revolutionary” in the way they think about their investments as the foundation embarks on a new $1bn programme of mission-related investments, which it announced in April.

The Ford Foundation announced on December 4 that it had appointed Roy Swan as director of its Mission Investments team, based in New York. Swan will lead a dedicated team managing the $1bn portfolio over the next ten years in mission-related investments (MRIs).

His team also leads one of the largest portfolios of program-related investments (PRIs) for charitable activities in the US, which the Ford Foundation pioneered in the impact investing field. Previously, Swan held several high-level executive roles at Morgan Stanley, most recently serving as Managing Director and Co-Head of its Global Sustainable Finance team.

As an example of the new mission-related strategy, Walker said the Ford Foundation was looking at real estate investments in Detroit, which would combine a growing interest in property in the city, but seek to mitigate the effects of gentrification that can lead to the displacement of poor and minority residents.He said this was an example of where ‘social justice’ could be at the core of its investment decisions and seek to encourage calculation of a social as well as a financial return on investment.

Speaking at the same event, Jim Sorenson, entrepreneur and Founder of the Sorenson Impact Foundation, said two regulatory developments in the US were driving impact investing, particularly in under-invested parts of the US.

One, he said, was the Social Impact Partnership Act (SIPA), a US bill which seeks to create a $300m (€279.5m) federal fund to catalyse social impact bonds.

The other, The Investing in Opportunity Act, aimed to correct a imbalance whereby 80% of venture capital investing goes to just a few regions in the US, notably Silicon Valley and New York. The Act offers a long-term deferral of capital gains in under-invested regions.
Sorenson said impact investing policy initiatives in the US tended to have bipartisan support.

Separately, AoL founder and tech entrepreneur Steve Case announced yesterday that his Revolution venture capital firm had launched a $150m ‘Rise of the Rest’ fund to invest in entrepreneurs in under-financed parts of the US. The fund received commitments from some of the biggest names in US finance, although Case said it was not an impact investment fund.