Responsible Investor
Home News & Analysis Institutions German companies are falling short on human rights. Could this be a...
Return to search
Social 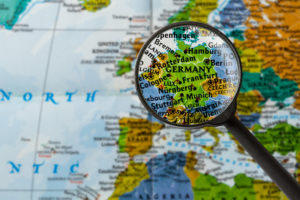 This month has seen a string of human rights allegations against German companies. Big names like Aldi, Lidl, Rewe and Edeka have been accused by Oxfam of poverty pay, harsh working conditions, and gender discrimination in their supply chains.
Volkswagen and Thyssenkrupp have been accused by the AFL–CIO of violating the workers’ rights standards in the United States that they follow in Europe. And a study by Christliche Initiative Romero links the supply chains of Edeka, Aurubis and Thyssenkrupp with human rights abuse.

These allegations come at a critical time, with significant implications for investors. In 2020, the German Government will decide whether to introduce legislation similar to France’s Duty of Vigilance law – which mandates that companies identify and prevent human rights risks in their supply chains – and push for related “EU-wide regulation”.
How representative are the recent allegations? In a new study by Business & Human Rights Resource Centre and the ZHAW School of Management and Law, we assessed the 20 largest German companies on whether they meet the basic requirements of international human rights standards.
We deployed the world class methodology of our partners at the Corporate Human Rights Benchmark. The results are not encouraging. Disappointingly, we found that not one of the 20 largest German companies could show they have the policies and practice in place to meet the basic requirements of the UN Guiding Principles on Business and Human Rights.
90% (18/20) of the companies failed to fully disclose how they manage their human rights risks sufficiently (due diligence). Just two companies, Daimler and Siemens, received points on all four indicators looking at human rights due diligence processes.
Less than half (8/20) of the companies scored below even 40%, with Volkswagen only just meeting this low threshold. Among the weak scorers overall were German household names Deutsche Post DHL, RWE and Deutsche Bank.

If these results from our sample of the 20 largest companies (which we would expect to be high-performers) is replicated in the German Government’s wider survey, then companies and investors should expect a Duty of Vigilance-style law enacted in Germany soon.
Should this happen it would be the latest sign of the growing momentum behind mandatory human rights due diligence. (See our mandatory due diligence news portal and blog series.) In the last two months, MEPs have called on the incoming EU Commission to advance mandatory human rights due diligence laws under a Green Deal; legal cases are now taken up under the French Duty of Vigilance law; and the Finnish government has commissioned research to develop a duty of care law. Meanwhile, a rising number of number of companies and investors have expressed support for due diligence laws to help them assess their risks and prevent abuse.It comes as part of a broader drive towards corporate responsibility. The UN Global Compact recently announced 87 companies, with a combined market cap of $2.3tn, have joined the campaign to keep global warming below 1.5 degrees centigrade. The US Business Roundtable announced a U-turn away from 22 years of shareholder primacy towards ‘purposeful business’ for all stakeholders. The US Customs and Borders has blocked shipments from Malaysia, Zimbabwe, Brazil, China, and DRC allegedly produced with forced labour; and Marc Benioff, the CEO of Salesforce has called for a “more fair, equal, and sustainable capitalism”.
The Financial Times has added its voice, calling for bold government and investor action. An October 21 editorial said, “Rejecting the dogma of shareholder primacy is not a question of bleeding hearts, it is a matter of enlightened self-interest”, adding: “Governments should update corporate and investment legislation to allow for a broader perspective.”
These shifts are long overdue. The Resource Centre has, with many partners built a database of evidence around corporate advances and abuses over 17 years. One conclusion is certain: The paradigms of ‘voluntary corporate action’ on human rights and the environment, combined with ‘shareholder primacy’, simply do not generate a powerful-enough market signal to redirect corporate behaviour towards minimum international standards.
The 2018 Corporate Human Rights Benchmark found that 40% of the largest companies in the highest risk sectors of extractives, apparel, and agriculture, scored zero on all the due diligence indicators. The average overall score was 27%, with nearly two thirds of companies scoring under 30% and over a quarter scoring below 10%. (The 2019 benchmark is published on 15th November.) In KnowTheChain’s latest report on forced labour in the high-risk sectors of agriculture, ICT and apparel, the average company score was 33%, with just 13% of having engaged with workers’ organisations.
The evidence on companies involved in the transition to a zero-carbon economy is equally damning of the voluntary approach. Our new Transition Minerals Tracker reveals that of the 23 largest companies mining cobalt, copper, lithium, manganese, nickel and zinc – the six key minerals for renewable energy technology – 87% have faced allegations of abuse since 2010. Nearly half (46%) of the 109 renewable energy companies we surveyed between 2016 and 2018 have a basic human rights commitment. Yet we’ve tracked 152 allegations of human rights abuses linked to renewable energy projects, involving 103 companies, since 2010.
These findings – along with the new study results for German companies – expose the severity of our current situation. The resulting damage of unbridled markets has fuelled the ecological crisis, inequality and political instability. Yet the positive signs mentioned above suggest we could be at an important tipping point – a paradigm-shift in the duty of care expected by business regarding human rights and the environment, and a new age where markets are recast as a ‘smart mix’ of voluntary action, active investor engagement, and robust government regulation and incentives.
I am reminded of the words of William Anderson, inhouse counsel (human rights) at adidas, writing for our website in June: “In short, it is not a question of if, but when such laws will be in place and how they will impact current business operations and practices.”