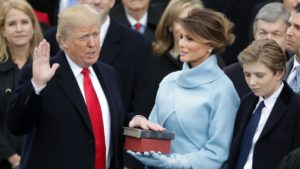 Responsible investors in the US met the election of Donald Trump in 2016 with shock, yet 12 months on from his inauguration some in the ESG community are beginning to see him as a ‘godsend’ for the sector.

Robert Brooke Zevin, founder of Zevin Asset Management, captured the mood immediately after the election in a post titled Fear and Loathing in which he said the election led to “despair and foreboding”.

But how do prominent members of the US SRI community feel, one year on?

“There was the idea that there would be a claw-back on a lot of safeguards and disclosure requirements that investors had come to rely upon at the beginning of Trump-time and most of that has played out.”

He cites the decision to withdraw from the Paris Agreement, dismantle the Green Power Plan and an attempted “assault” on shareholder rights and the Dodd-Frank bill.

But, conversely, John Streur, CEO and President at Calvert Research and Management, sees room for optimism.

He told RI: “Trump’s coming in now is a godsend because it is causing investors to go directly to companies to say that ‘these are material risks to your business, this is a global investment landscape, we need to understand what you’re doing relative to other companies’…I really think investors are pressing forward in a way that they might not have had to, if we had a Clinton administration.”

Echoing such optimism, Tomaino also believes that “SRI investors sense that there is an opportunity to re-argue the importance of companies disclosing information about their workforces, about adopting science-based greenhouse gas targets…to be out there reminding companies even in the absence of government leadership on this that they can set their compasses by Paris”.

Streur points to the creation of things like the Sustainability Accounting Standards Board’s Investor Advisory Group (IAG) last year as an example of this “significant increase” in direct corporate engagement since the election. The IAG – whose members include the likes of Blackrock, Vanguard and State Street and represent over $27tn in assets – seeks to engage with companies to push them to disclose their material ESG risks.

Hermes EOS, engagement arm of London-based responsible investment house Hermes Investment Management, last week announced it had expanded its US presence with the appointment of Tim Youmans as it new Engagement Director for the region. The move, a spokesperson said, “reflects the growing interest and need for these services to have a local base the US”.

The vacuum created by the Trump administration’s regulatory pull back has also compelled more investors to seek to “understand, manage, and reduce ESG risks”, according to Streur, who added, “in the United States money is moving, customers are moving money, retail and institutional customers are increasing their allocations to comprehensively, responsibly managed portfolios beyond just restricting companies or industries”.Nuveen, the asset management arm of US financial-services giant TIAA, attests to this move towards responsible investing under Trump; it found that more that 72% of investors say, ‘given today’s political climate, I prefer to invest in ways that will positively impact the environment’.

Mindy Lubber, CEO and President of US sustainability advocacy group Ceres, has also seen an acceleration in ESG under Trump, both in terms of the movement of money and investor action.

She told RI, that Trump’s pulling out of the Paris Agreement created a “sense of urgency” among investors, which, she argues, “turbo charged” shareholder votes on climate in 2017.

“It wasn’t only that there were 157 climate related shareholder proposals, it was that investors came out and supported them, Blackrock voted their proxies in support of climate change resolutions, Vanguard changed its position and voted their proxies, Fidelity is looking at voting their proxies, and State Street took a leadership position on voting on climate proxies…the voices of investors were far louder, far more consistent over the last year.”

The private sector, she said, had helped fill the “breach” created by Trump.

Amy Borrus, Deputy Director of the US investor body the Council of Institutional Investors, said that while at the federal level rules designed to protect public health and safety are being “relaxed or gutted” the picture beyond Washington was very different, especially with regard to climate risk.

“In state capitals, city halls, in business and among active investors, there is commitment to tackle climate risk. And after a season of raging wildfires and devastating storms, this sense of urgency will only increase.”

This year has already been eventful for ESG in the US, with New York’s five public pension funds, running assets of $189bn, announcing their plans to withdraw the entire $5bn of their investment holdings in 190 fossil fuel companies within five years.

And, Trump, who last week hinted at the possibility of the US returning to the Paris climate deal, may also turn out to be an unlikely champion of impact investing. It was reported that among the provisions of the Republican tax bill signed by the President in December is the new “Investing for Opportunities Act,” which lets investors temporarily defer taxes by investing their capital gains in distressed areas designated as “opportunity zones”.

With as much as $2.3tn in unrealised capital gains in US stocks and mutual funds, the new provision could, reportedly, draw significant investment to low-income communities.

So, unlikely as it might seem, it could be that the Trump Presidency will in time be seen as a pivot point for ESG in the US.