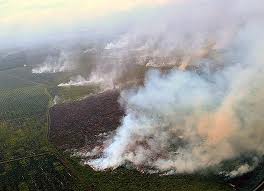 Norges Bank Investment Management (NBIM), the manager of Norway’s NOK7.2trn (€785bn) sovereign wealth fund, has decided to divest South Korean steel giant POSCO and subsidiary Daewoo International as well as two Malaysian firms due to what it says is a risk of “severe environmental damage.”

It follows recommendation from the fund’s Council on Ethics which recommended the exclusion of steelmaker POSCO and its 60.3% subsidiary Daewoo due to the latter’s role in “the conversion of tropical forest into oil palm plantations in Indonesia”.

“The scale of conversion and the fact that the concession area lies in a region of unusually rich and unique biodiversity entails an obvious risk that conversion will cause severe environmental damage,” the panel said. It also highlighted what it said were illegal clearance methods and that the “company appears to be doing little to reduce the environmental damage”. Daewoo owns 85% of Indonesian plantation company PT Bio Inti Agrindo.

At the end of 2014, the giant fund held a stake of around $198m in POSCO, corresponding to a 0.9% stake, the panel said. Also excluded are Malaysian-based IJM Corporation and Genting Group, also for palm oil activities. In a statement, NBIM said: “Before deciding to exclude a company, Norges Bank shall consider whether the use of other measures, including the exercise of ownership rights, may be better suited.The Executive Board concludes that it is not appropriate to use other measures in these cases.”

Human rights NGOs have blasted POSCO subsidiary Daewoo for allegedly violating human and labour rights in Uzbekistan. The NGOs say that Daewoo, a textile supplier, sources Uzbek cotton that has been harvested with the help of slave and child labour.

Last month, it emerged that three NGOs were urging the National Contact Point (NCP) of the OECD – former Ethical Council Head Ola Mestad – to make NBIM aware of Daewoo’s alleged violations and get it to divest the company as well as its parent POSCO. In response, Mestad said he couldn’t follow up with NBIM not because he didn’t think the NGOs case was legitimate, but because the OECD had not yet specifically defined what the responsibilities of a minority investor are.

For its part, NBIM said it was very aware of the Uzbek problem and had raised the issue with POSCO’s board. A spokeswoman for the manager added that if the allegations proved to be accurate, POSCO and its subsidiary could be excluded. That has now come to pass.

An earlier issue was when a group of NGOs brought a claim against NBIM under the OECD Guidelines relating to the giant investor’s holding in POSCO, which is facing alleged environmental and human rights violations at a plant in India. Link