Responsible Investor
Home News & Analysis Governance Paul Hodgson: Abstentions: Are they votes for, against or neither?
Return to search
Governance 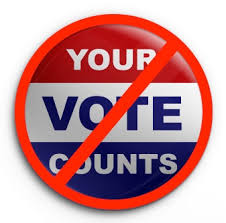 During the 2016 proxy season, a consortium of investors filed a new style of resolution calling for simple majority voting at 12 companies, including FedEx, Goldman Sachs, J.P. Morgan Chase, Intel, McDonald’s, and Morgan Stanley. The resolution asked that all shareholder proposals be decided by votes cast ‘for’ and ‘against’, excluding abstentions. The FedEx vote has yet to be held, but none of the other resolutions received more than 13% support.
But why should such a proposal be needed in the first place?
Somewhat anomalously in a democratic country, when corporations count votes ‘for’ and ‘against’ shareholder proposals, abstentions are typically treated as votes against a shareholder resolution. When it comes to management resolutions, on the other hand, such as non-executive director elections, abstentions are frequently not counted at all. This anomaly is “allowed” because proxy voting is governed by State, not Federal law. The Securities and Exchange Commission’s official vote-counting formula, for example, excludes abstentions in all votes.
In support of the resolution’s intent, Bruce Herbert, Chief Executive of Newground Social Investment, said: “More often than not, abstain votes are added as an additional category of vote that is counted as if against every shareholder-sponsored item – subverting voter intent, since the voter deliberately chose to vote neither for nor against. The result is that a resolution can lose even when there are more ‘for’ than ‘against’ votes – counter to established standards of electoral democracy.” As Herbert goes on to suggest, this not only provides incorrect results, it also misleads investors, the press, and other proxy voting watchers because abstentions are conflated with ‘against’ votes giving an inaccurate picture of support.
“The gestation of this resolution goes back to 2005,” said Herbert in an interview with RI. “The importance of how votes get counted came to light when we filed a political disclosure resolution at Plum Creek Timber, which at the annual meeting informed shareholders and the press that the proposal received 5.8% of the vote. We thought little more about it – since it had passed the 3% threshold [required by the SEC for refiling] – until the Investor Responsibility Research Center (IRRC) published its annual review of the proxy season.“The IRRC report highlighted our resolution in a cover story as having received the highest level of support – 56.2% – of any shareholder-sponsored resolution that year. At that point, if you will, the scales fell from my eyes regarding the significance of how votes are counted. Plum Creek is incorporated in Delaware, which allows companies to choose any voting formula they wish. Back then that included not just votes cast ‘for’ and ‘against’ – as one would expect in a democracy – but abstentions and broker non-votes. Remove these and our proposal passed.
“We later approached Plum Creek to ask it to change its bylaws, which it did,” continued Herbert. “Starting in 2010 we began to approach more companies – including Cardinal Health, Smucker’s, and ConAgra – all of whom agreed to a bylaw change. Since initiating this campaign, roughly a third of companies approached have agreed, and made changes to their governing documents to adopt a simple-majority approach.”
After that the resolution went through a number of different iterations. In 2011 to 2012, a missing proviso – “[unless] applicable laws or stock exchange regulations dictate otherwise” – caused the resolution to be open to challenge at the SEC. Once this proviso was included, the resolution still met opposition over its application to director elections, which are covered by a large number of different voting standards. The next step was to exclude director elections. Then, in 2016 the resolution focussed solely on non-binding shareholder resolutions. The current crop is being filed and co-filed by Newground Social Investment, Walden Asset Management, Boston Common and First Affirmative Financial Network among others.
Thus far, the votes in favour of the resolution have been, 10.6% at Intel, 12.3% at McDonalds, 6.1% at Morgan Stanley, 5% at Goldman Sachs and 7.8% at JPMorgan Chase. It would have been the supreme irony if any of these had failed to pass because abstentions pushed ‘against’ votes into the majority, but, unfortunately, none were close enough. Change appears to be more likely through engagement.