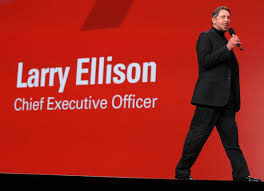 A group of major investors recently sent a letter to Oracle’s shareholders indicating that they believed that there was “insufficient board accountability” at the company as well as “poorly designed compensation programs” both of which “create significant risks for shareholders.” Oracle’s recent musical executive chairs, with former CEO Larry Ellison stepping down to remain as chief technology officer and executive chairman and Mark Hurd and Safra Catz each being promoted to the CEO position also failed to impress the shareholder group which classified the changes “as simply a rearrangement of the deck chairs which serves to further empower executive management.”
So who are these major investors? The group is made up of the Nathan Cummings Foundation (the charitable foundation formed by Sara Lee founder Nathan Cummings), supported by Dutch pension fund manager PGGM, RPMI Railpen Investments, the UK pension fund for railway employees, the California State Teachers’ Retirement System (CalSTRS), and the UAW Retiree Medical Benefits Trust. It’s a serious coalition; as a group, these shareholders own well over 10m shares, worth some $385m.
The latest effort to improve board accountability at Oracle, and turn it into one that represents shareholders rather than management, culminated in Nathan Cummings filing a “proxy access” resolution, co-sponsored by the other members of the group, to be voted on at the company’s annual meeting on November 5.
But this escalation – the term used by PGGM – is the latest in a long history of engagement, or attempted engagement, with the company. PGGM and Railpen’s first attempt at initiating change at the company began in 2010 with an initial letter to the then Chairman of the Board calling for a meeting to discuss corporate governance. This was followed by numerous letters and other communications regarding concerns about the board and compensation at the company over the next four years, to both the board and management. All with little, or no result.
Engagement is the first choice for these investors; behind-the-scenes discussions to allow the company to make changes without a very public spat. For these investors, disclosing their nuanced engagement efforts is very unusual, but then Oracle is a very unusual company given the history of unresponsiveness to shareholder concerns. When attempts at engagement are ignored, then it is time to escalate in the form of a proxy resolution.

This is not the first time, of course, that Oracle has faced disapproval from shareholders. It lost its Say on Pay vote twice, in 2012 and 2013, and really only won in 2011 because of Larry Ellison’s 25% stake in the company.Oracle’s response to these losses – and to majority independent shareholder votes against remuneration committee members as well as other members of the board – was to do nothing at all initially. In 2013, prior to the annual meeting, CalSTRS, along with PGGM and Railpen, sent an open letter to other shareholders expressing dismay at the complete inaction of the board following its Say on Pay failures.

“If it still fails to listen to our concerns, it is ridiculous to carry on owning the stock”

This earlier letter stated: “… it is our opinion that the Board of our [note the use of this pronoun] company is failing in its duties to shareholders by continuing to endorse a pay structure that a majority of shareholders do not support. It is not in the interests of shareholders to elect a Board that interprets the defeat of the advisory vote on pay as a mandate to do nothing and we must question whether re-electing a Board that does not respond to shareholders is a Board that we wish to have continue in our service.” Strong words. Some eight months after the second clear defeat, the company made some minor changes to executive remuneration which reduced the overall pay levels for all the senior executives at the company, changing them from incredibly well paid to just extremely well paid. While there was an introduction of performance based share awards, Deborah Gilshan, corporate governance counsel at Railpen, characterized the changes as moving pay policy from “very, very poor to very poor.”

But these changes may not be enough to cause either PGGM or Railpen to support the company’s pay policies this year, it was revealed in an interview with Gilshan and Catherine Jackson, senior adviser at PGGM. Without some serious response from the board the two funds may also vote against the whole board, as last year.
It was not just the nature of the pay changes which failed to impress them, it was the company’s attitude. The board failed to acknowledge shareholder dissatisfaction over pay, and the nature of the language in the proxy statement’s pay report showed no recognition of the two consecutive failed say on pay votes.
But it is not about pay any more. Board actions, or the lack of them, has confirmed the investors’ belief that the directors are unconcerned about shareholder dissatisfaction and that their clear alignment with management has made them unfit to serve as the shareholder representatives they are supposed to be. “This has gone way beyond compensation and is an indicator of a deeper malaise on the board,” Gilshan said.

A serious response from the board seems unlikely. While neither Gilshan nor Jackson are based in the US (Gilshan is based in London and Jackson in Toronto), both have made themselves available to visit Oracle’s headquarters on many occasions, but board members have not taken up these offers.

Once Nathan Cummings had filed the resolution, the group of investors co-sponsoring the resolution sent a letter to the board with a request that they meet to discuss their issues. The group indicated that they would all be at the Council of Institutional Investors conference at the end of September. Since the conference was in Los Angeles, not that far from the company’s Redwood City home, it was hoped that a meeting would take place. But then there was no further response from the company. The investor coalition is still waiting, with only a couple of weeks to go before the annual meeting.
Representatives from the coalition will be attending the annual meeting and if the company continues to ignore requests for meaningful engagement aimed at making changes to reflect shareholder concerns, they may make a public statement at it. Jackson indicated that if the company failed to respond to majority shareholder demands, there was a very real prospect that PGGM would divest itself of its Oracle investments. “After years of putting resources and time and effort into engagement, if the company still fails to listen to our concerns around governance risks, it is ridiculous to carry on owning the stock,” she said.
Reiterating that to co-sponsor a shareholder resolution is only resorted to when everything else has failed, both funds confirmed that they have rarely taken these steps in the past. “We come from markets where there are clear duties of stewardship surrounding governance,” she added. “We’ve done our duty in terms of the exercise of ownership of our capital.”
The resolution has been drafted to allow as many shareholders as possible to support it.It was not formulated as a binding bylaw change, a move that would force the company to implement it if it passed with majority support. The proposal simply asks the company to implement proxy access, which given the current level of unrest among shareholders does not seem farfetched. For the proposal, the group compromised on “3% for three years” requirement, in other words for shareholders to be given the right nominate a director candidate on the company’s proxy statement they must have owned 3% of the stock for three years. This is in line with Securities and Exchange Commission thinking, as well as being similar to the dropped requirement from the Dodd-Frank Act. Both PGGM and Railpen have held Oracle shares for much longer than three years.
In its current state, the board seems barely independent. Now that Ellison is executive chairman – and clearly still on the board – former non-executive chairman Jeffrey Henley has been demoted to vice chairman. Unfortunately Henley was CFO at Oracle for 13 years which renders his independence all but impossible. Catz and Hurd, the two CEOs, are also on the board. In addition, four of the remaining so-called independent directors have been on the board for 10 years or more, a tenure that makes independence unlikely. That leaves two directors out of the 11-person board.
“The ‘rearrangement of the deck chairs’ makes it even more imperative to have some real independence on the board,” said Gilshan. While recognising that every company is unique and each has different needs, in the case of Oracle, a strong independent chairman and a majority of independent directors is even more important for the proper functioning of the board, the two investors agreed. As Jackson commented, Oracle is an “intransigent outlier”.