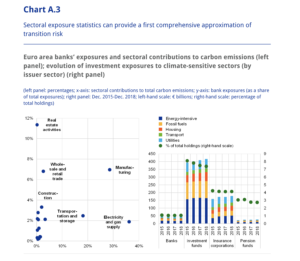 Pension funds have reduced their exposure to investments that could be affected by climate policy – unlike banks and insurers – according to the European Central Bank.

The ECB has looked at climate change and financial stability in the latest issue of its twice-yearly Financial Stability Review and found that, despite limited data, “climate change-related risks have the potential to become systemic for the euro area, in particular if markets are not pricing the risks correctly”.

It said that efforts to gauge financial institutions’ exposures to [climate] transition risk have so far mostly concerned investments in certain industrial sectors.

“Typically, the most climate-sensitive sectors are selected in the NACE classification on the basis of an aggregate environmental metric, such as a measure of carbon emissions for the sector,” the ECB said, referring to the European Union’s industry standard classification system.

It cited academic research by the University of Zurich’s Stefano Battison and others remapping NACE onto new climate policy-sensitive sectors, combining criteria including carbon emissions, the role of the sector in the supply chain, and the existence of traditional policy institutions for the sectors.

This has been applied to the ECB’s Securities Holdings Statistics by Sector (SHSS) database.The upshot is that “the evolution of portfolio investments shows that investment and pension funds have reduced their relative exposures to securities issued by climate policy-relevant sectors in recent years”.

“By contrast, banks and insurance corporations kept their exposures relatively constant.” Although it notes that the analysis of the banking sector “suffers from the fact that loans are not included in the SHSS”.

In a footnote, the ECB notes that for institutional investors, “policy guidelines may have a large impact on their asset allocations” – citing the example of the Norwegian wealth fund divesting from upstream oil and gas producers in March 2019 (although Norway is not part of the euro area that is the subject of the report).

The ECB called for a “deeper understanding” of the relevance of climate change-related risks for the euro area financial system at large.

“Better data availability and comparability and the development of a forward-looking framework for risk assessments are important aspects of this work going forward.”