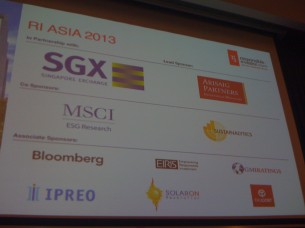 The Chief Executive of the Singapore Exchange (SGX) revealed this week to Responsible Investor’s RI Asia conference that the exchange was planning to move to a comply-or-explain corporate governance regime despite a disappointing response to an SGX-backed survey on the sustainability policies of companies listed in the country. Magnus Böcker, Chief Executive Officer at SGX, made the announcement in his keynote address to the RI Asia conference, which took place in Singapore on March 19/20. Business media in the region picked up on the news. Böcker also told the conference that the exchange was also exploring the possibility of creating a Singapore sustainability index.
No timeline was given on the introduction of comply-or-explain rules under which listed companies will have to meet a set of environmental, social and governance standards, or explain why they can’t. Böcker said the decision reflected increasing investor demand for non-financial data: “With the world moving forward and embracing sustainability as a core foundation of successful business and long-term performance, we arereviewing our policies and will push forward to greater disclosure and practice.” Böcker noted, however, that a major survey of the sustainability reporting practices of its 100 largest companies announced at the 2012 RI Asia conference “had not inspired”. Just 13 per cent of 100 companies surveyed KPMG on behalf of SGX said they used internationally-recognised standards to report sustainability-related matters.   Böcker said the results reflected a lack of sustainability commitment at present from the exchange’s listed companies. Consequently, he said SGX would introduce more tools to support listed firms on sustainability reporting, including an update to reflect the forthcoming GRI 4 reporting guideline from May this year. He said an online investors’ guide to reading sustainability reports, would also be made available for retail investors.   More than 220 ESG investment professionals from the Asia Pacific region attended the RI Asia conference, including speakers from Australia’s AUS$95bn Future Fund and New Zealand’s NZ$22bn Superannuation Fund.