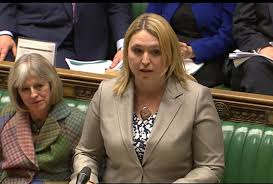 The UK Modern Slavery Act, one of first pieces of legislation in the world to specifically address slavery and trafficking in the 21st century, came into force last Friday (July 31).

It came during the week of the anniversary of the 1833 Slavery Abolition Act, which saw the British Empire end its involvement in the transatlantic slave trade.

Responsible Investor speaks to Karen Bradley, Parliamentary Under Secretary of State (Minister for Preventing Abuse and Exploitation) about the new Act’s provisions on corporate supply chain transparency that major UK investors have welcomed.

Prime Minister David Cameron has announced that companies with a turnover of £36m (€51m) or above will be required to report on how they prevent slavery in their operations and supply chain. How will this come into force?

The measure is not yet live and it is something which will be commencing in October and we will be announcing which year-ends will have to comply shortly. We will also be issuing statutory guidance to make sure businesses understand what we are looking for. I think the point of the provision is that it’s not saying to business what they should or should not do to eradicate slavery in their supply chain, but it’s saying they have an obligation to tell the public what they have done or not done with regards to slavery in their supply chain. It’s been described to me as shining a light down the supply chain so we can see what’s going on through not dictating by government what companies should do, but just saying to businesses ‘you should disclose this to your stakeholders’.

A coalition of investors with a total of £940bn in assets engaged with government on the supply chain transparency measure. What can they do now to support their holdings with the new law?

This month two US Congress members tabled a bill around companies disclosing measures to prevent slavery in their supply chain. Why do you think momentum is building worldwide around this?

In the case of the UK, the Prime Minister and the Home Secretary [Interior Minister] have taken a real personal interest in this matter. The fact that this hidden crime of slavery is going on across the UK, we estimate that there are between 10,000-13,000 victims of slavery here in Britain, never mind the estimates of 30-35m worldwide. The supply chain measure is one that has been talked about in the British parliament for some years but we needed to get it right. I am aware of countries and parliaments across the world that are looking to do what we are doing here in Britain.California has had an act for a couple of years now, but it only applies to goods, not services and businesses with a turnover of £100m. In the UK we have gone further, we’ve gone for small businesses and we’ve gone for goods and services. From conversations with counterparts across the world, they are very interested in how we do this and how successful it is, and they are looking to emulate the kind of work we have done here in Britain where we are world-leading in this type of measure.

How will the measure help businesses tackle slavery in their supply chains?

I think the hardest thing for business is what does slavery look like, how can they have certainty, how can they be comfortable with it. We engaged and worked hard with business to make sure we were doing the right thing for them and the biggest problem that businesses identified is that they all want to eradicate slavery from their supply chains but they are just not sure how to, or what to look for. And we believe that this measure, by making businesses have to declare what they have done and to disclose to shareholders and customers what they have done, is the appropriate way of assisting businesses, and giving businesses the opportunity to be public about what they are doing and try and protect them. I think that we can all agree that there is nothing worse for a brand than dreadful headlines in the newspaper or on the TV around slaves having produced the goods they sell, and certainly the Rana Plaza disaster in Bangladesh was one of those things which really made business say we need to know what is going on, we need to understand this, and we all need to do this together as well, which is why we legislated, it can’t be voluntary where some businesses do it and some get away with it. This has to be all businesses saying what they have done.

Is the threshold of £36m too low to be meaningful and could it be potentially too burdensome?

Thirty-six million pounds is the definition of a large company in the Companies Act and it was also the overwhelming choice of those businesses who responded to the consultation in terms of the level they felt the threshold should be set at. But I think the other point is that it is not acceptable to have slavery in any supply chain now matter what size of the business. And all we are asking is that they disclose what action they have taken, if they disclose they are taken no action whatsoever to determine whether slaver in their supply chain, they are complying with the law but they will be answerable to their shareholders, investors and customers as to why they have taken no action. Link