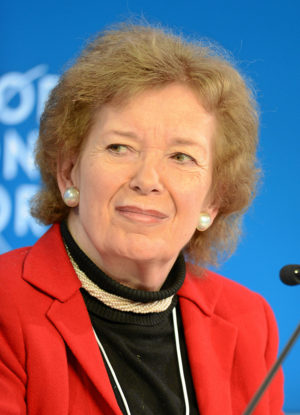 Mary Robinson, Ireland’s first female president and widely recognised for her commitment to global justice via her charitable foundation, has a new target in her fight for human rights: renewable energy companies and allegations of land grabbing.

The theme of the conference was ‘fierce compassion’, and not surprisingly the focus for the main event was climate change, with speeches from Robinson and former US vice president Al Gore on the topic – where among other things he focused on the massive growth of the solar industry and parallels between sub prime mortgages and unburnable carbon.

Robinson, who preceded Gore, said “climate justice” was the subject of her own ‘fierce compassion’ but noted that without compassion a fierce approach to tackling climate change could be dangerous. “Vulnerable people will be at risk,” she said. “Not consulted and facing a loss of land and cultural heritage.”

The following day, Robinson expanded on her concerns on a panel session on global sustainability with David Blood, founder with Gore of Generation Investment Management and Mindy Lubber, president of Ceres.

Robinson said that the biggest number of complaints to the Business & Human Rights Resource Centre currently were around renewable companies building in areas without proper land rights.

After the panel, Robinson’s team told Responsible Investor that the issue has been taken up by The Elders, a group of global leaders working together for peace and human rights, founded by Nelson Mandela, and including Robinson, Kofi Annan, Jimmy Carter and Desmond Tutu.

This is an issue that investors will need to watch closely, especially as the popular green bond market, often used to finance renewable projects, continues to burgeon and attract more scrutiny.NGOs, led by Netherlands-based group BankTrack, have already warned on the potential negative social consequences of green projects.

Last year, in a letter to the Green Bond Principles, a set of voluntary guidelines put together by a group of leading banks in early 2014 to help develop the green bond market, 17 NGOs warned the Principles “may be associated with the financing of destructive projects”. At the time they highlighted a €2.5bn green bond issued by French utility GDF Suez.
They recommend that the Green Bond Principles take steps to make clear that projects that come at the expense of human rights violations and significant negative social and environmental impacts should not be considered ‘green’.

The NGOs say they will continue to scrutinise the green bond market closely. But it remains to be seen if all renewable energy developers will behave responsibly.

Along with the Skoll World Forum, Responsible Investor attended a fringe event in Oxford called Marmalade. At an informal event focused on divestment and investing in green energy, a renewable energy developer said, “a little displacement was OK”.

Another important theme for investors that emerged from the event was focus on limiting global temperature rise to 1.5C to prevent climate change.

In the week of the forum, it was announced that the Intergovernmental Panel on Climate Change is to release a report on how global temperatures can be held to a rise of 1.5C, following the Paris Agreement. Robinson, on the main stage, called for a “1.5C frame of mind”.

This was crystallised through a speech from a 16-year-old girl from the Marshall Islands, which the US used for nuclear testing in the 1970s.

She described a dome, sealed with radioactive waste, dumped by the US in its waters in 1979. “The dome is leaking, eroding and cracking,” she warned, highlighting that rising water caused by climate change was exacerbating the situation. She pleaded for a 1.5C world to stop her from becoming a climate refugee.