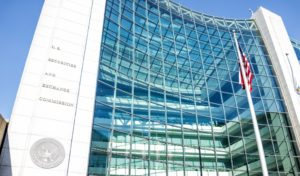 Hester Peirce has said that input on the US Securities and Exchange Commission’s proposed disclosure rules from ESG advisors, standard setters and rating firms should be viewed with caution because of their vested financial interests in the outcome.

In a speech yesterday, Peirce, one of the SEC’s Republican Commissioners, stated: “Any SEC rule can create money-making opportunities, but the potential breadth and novelty of ESG issues makes an ESG rule a particularly lucrative one, and thus may make it hard for us to get objective input. The ESG consultants, standard-setters and raters who are now making a lot of money in producing, seeking to standardise, and assessing voluntary disclosure have an incentive to ensure that whatever rule gets written keeps that money flowing.”

Peirce made the comments at an event hosted by Washington-based think tank the Brookings Institute. Her words, she said, were designed to “spark a textured conversation about the complexities and consequences of a potential ESG rulemaking”.

Peirce described the proposed ESG rulemaking as “high-stakes” as “so many people stand to gain from it”. This includes companies themselves, she said, which have an “incentive to shape the rules to make themselves look as good, and their competitors look as bad, from an ESG perspective, as possible”.

The partisan nature of the feedback was one of 10 issues flagged by Peirce in her comments, along with the issue of financial materiality.

Peirce echoed comments made by fellow Republican Commissioner, Elad Roisman, last month, stating that many ESG issues “lack a clear tie to financial materiality and therefore do not warrant inclusion in SEC-mandated disclosure”.

The SEC’s five commissioners have disagreed, largely along political lines, about whether reporting requirements should include how business activities impact the environment and society – or whether they should stick to addressing issues that pose financial risks to companies. Earlier this year, Democrat Commissioner Allison Herren Lee argued that the SEC should adopt the broader, ‘double materiality’ approach.

But Peirce said that “if specific ESG metrics are material to every company in every sector across time, we can identify them one-by-one for incorporation in our rules, but throwing out materiality or stretching it to encompass everything and anything would harm investors”.

She also warned that an ESG disclosure rule by the SEC could contribute to a green financial bubble.

Peirce suggested further guidance would be a “better path forward” than creating “a prescriptive ESG rule that departs from and undermines our agency’s limited, but important role”.