Norway’s largest private asset manager has today announced the divestment of 27 stocks, representing $47m in shares, as part of its new “enhanced” climate policy, designed to “stimulate the green transition”.

US oil & gas giants Exxon and Chevron are among those excluded by Storebrand Asset Management, dropped because of their lobbying efforts to undermine climate action. They are joined by Anglo-Australian miner Rio Tinto, US gas utility Southern Company and German chemical firm BASF, also booted out over lobbying.

‘We expect that our peers will adopt new policies like this as part of a logical progression in global fossil fuel divestment’ – Jan Erik Saugestad, Storebrand Asset Management

All five are targets of Climate Action 100+ (CA100+), the $40trn investor engagement initiative seeking to steer firms toward Paris aligned trajectories, which has been increasingly focused on corporate lobbying.

In June, 53% of shareholders, including Blackrock, supported a climate-related lobbying proposal at Chevron, making it one of the best supported resolutions so far this year.

But Storebrand AM, despite being a CA100+ member, has lost patience with the quintet on the issue and has updated its climate policy so that any firms found to be lobbying against the Paris Agreement or climate regulation in general may now be excluded. 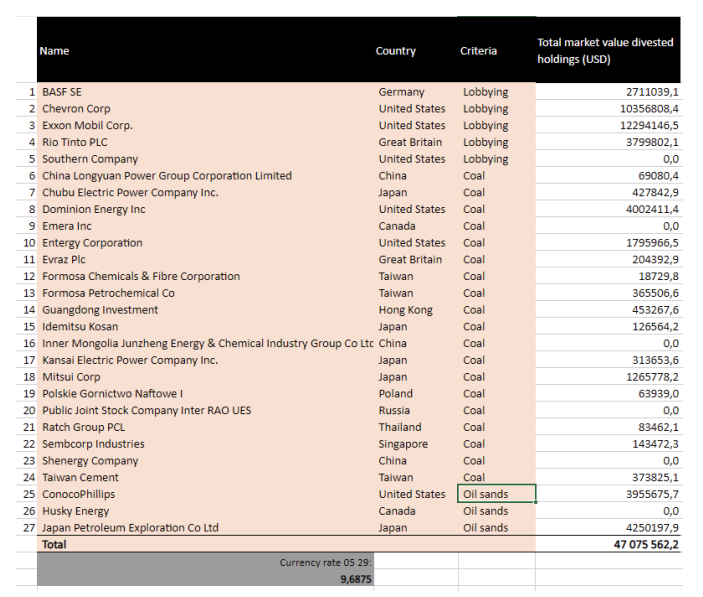 The asset management arm of Storebrand will also exclude any companies that “derive more than 5% of their revenues from coal or oil sands”. 22 firms will be removed on this basis, including Mitsui Corp., Kansai Electric Power Company and Chubu Electric Power Company – the Japanese companies were described by Saugestad as being “too slow to get out of coal”.

As it unveiled its new policy, the Norwegian manager also urged greater action on climate “from across the financial system”.

"We expect that our peers will adopt new policies like this as part of a logical progression in global fossil fuel divestment’’, Saugestad stated.

“Investors need to be responsible and proactive in accelerating the green transition. We are not passive actors awaiting the pending systemic harm that climate change will unleash on ecosystems, societies, and economies.”

European oil & gas majors including BP, Shell and Equinor were also warned not to “rest easy” by Saugestad, despite “performing relatively better than US oil majors".

He stressed the need to “accelerate” away from oil and gas, but “without deflecting attention onto carbon offsetting and carbon capture and storage”.

Storebrand AM’s revised climate strategy will also see it develop “climate risk analyses at a portfolio level”, which it will report on annually.

Earlier this month, Storebrand – in collaboration with KLP and the Rainforest Foundation Norway – published a report on managing deforestation risks. Its concerns around deforestation are also reflected in the new strategy, along with the goal to increase “capital flows into low-carbon, climate-resilient companies”.

Last month, Storebrand played a key role in a pioneering – and fruitful – form of investor engagement with the Brazilian Government over the deforestation of the Amazon rainforest.