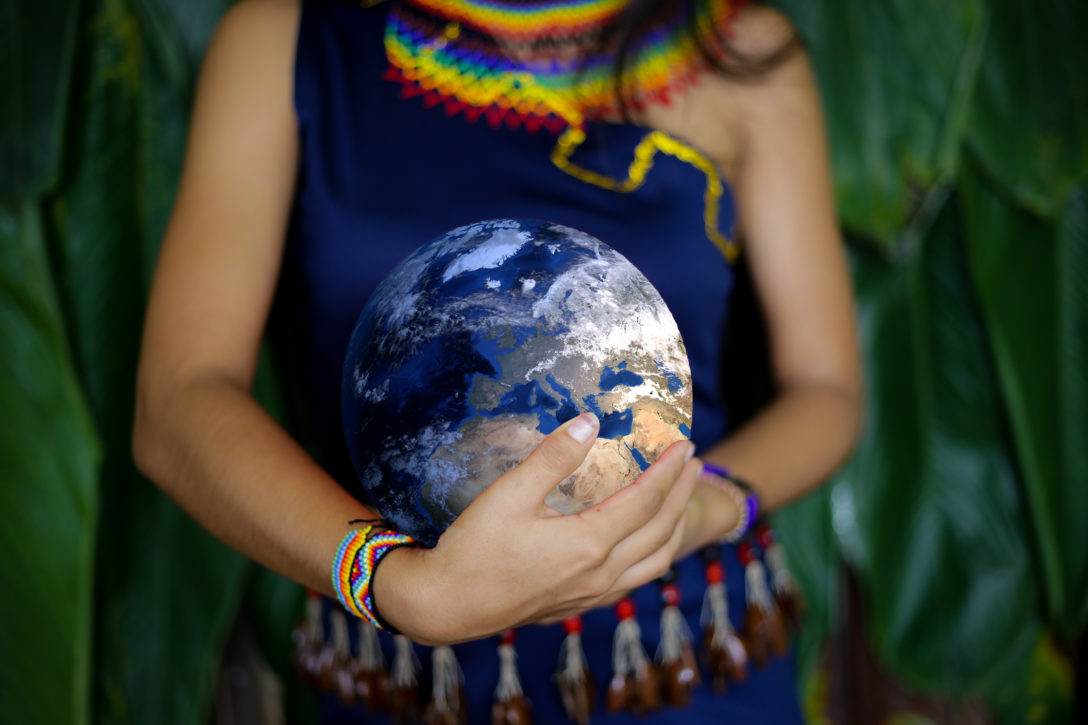 Since 1994, every 9 August has been designated International Day of the World’s Indigenous People. The date was chosen as it marked the first meeting, in 1982, of the United Nations Working Group on Indigenous Populations.

The aim of the day is to encourage the spread of the UN’s message on the protection and promotion of the rights of Indigenous peoples.

After two years of protests and political wrangling, the people of Chile will vote on a new constitution in coming weeks. Among its many updates, the draft document – unveiled this month – enshrines the rights of the country’s Indigenous people, giving them greater sovereignty over their own land.

It’s a move that has made some in the private sector, especially Chile’s booming mining industry, nervous. Concerns have been voiced over litigation risk and growing bureaucracy. But it’s part of a broader trend: from Colombia to Canada, politicians are putting greater emphasis on protecting the rights of Indigenous peoples against big business.

In Australia, for example, a number of states are currently considering new laws to give greater protections to Aboriginal communities. The proposed bills are partly a response to a 2020 scandal, in which Rio Tinto was granted permission to blow up the sacred Juukan Gorge caves in Western Australia to extract iron ore. The destruction of the historic rock shelters caused huge public backlash and resulted in Rio Tinto’s CEO and two senior executives stepping down and forgoing their bonuses.

But the risks are wider than just a few large extractives companies. A report published by PwC in October found that three quarters of ASX200 companies had failed to implement a reconciliation plan for Indigenous peoples that was endorsed by Reconciliation Australia, a not-for-profit foundation that promotes a continuing national focus for reconciliation between Indigenous and non-Indigenous Australians.

On the investor side, Global Canopy found earlier this year that just 26 percent of 150 assessed financial institutions had a policy requiring the companies they finance to comply with free, prior and informed consent (FPIC) – which relates to the operation of companies on Indigenous lands – for forest risk commodities (cattle, soy, palm oil and timber).

As governments move to better safeguard Indigenous rights, companies and investors will need to strengthen their strategies – or risk hits to their reputation and share price.

Kevin Thomas spent more than a decade as chief negotiator for Canada’s Lubicon Lake Indian Nation, representing the community on issues such as land rights, environmental standards and employment agreements. Now, he runs the country’s Shareholder Association for Research and Education (SHARE). The initiative is one of the architects of Climate Engagement Canada (CEC) – a new, national version of Climate Action 100+, which will bring shareholders together to steward major carbon emitters towards greener business models.

“While the CEC is mirroring the CA100+ benchmarks as much as possible, one of the critical local variations we wanted to explore from the start is the question of Indigenous rights and the Indigenous economy here in Canada, so that our Just Transition benchmarks are built on right relations and contribute to growing that economy,” he tells Responsible Investor.

Thomas adds that the benchmarks will be developed with Indigenous experts at the table and will be an important part of engagements undertaken by CEC.

“At its best, this isn’t just about mitigating specific impacts on Indigenous nations,” he says. “It’s about re-thinking how we do our work. Indigenous world views don’t separate social, environmental or economic questions from one another. They don’t look at things like climate change in isolation from social or economic relationships. We’re going to have to learn from that, and move from piecemeal actions to holistic approaches.”

But stewardship efforts need to go beyond the big emitters and address the leaders of the climate transition too, says Thomas’s colleague Joseph Bastien, who oversees SHARE’s Reconciliation and Responsible Investment Initiative.

“We know that the transition to a low-carbon economy will raise demand for minerals and other resources to develop technologies such as electronic vehicles,” says Bastien, adding that many of these commodities are found in Indigenous territories and ancestral lands.

He also stresses the importance for investors engaging with Indigenous communities to understand that perspectives and priorities may differ.

“There are groups supporting oil and gas production as it provides economic opportunities, while others in the same communities are very concerned by the environmental impacts. A transition will have an impact on these communities – there will be a decrease in economic activity and revenues.”

Bastien adds: “Often an Indigenous communities’ perspective is assumed to be that of the very protective environmentalist, but it’s much more nuanced, as it is for any community dealing with these issues. There is a spectrum of opinions and there are tensions, but I think there is also a shared understanding that these activities are not sustainable.”

As a result of these issues, SHARE is working with fellow non-profit First Peoples’ Worldwide to research the risks and opportunities stemming from the climate transition. Interviews are currently underway and the project will publish its initial findings later this year.

Kate Finn, executive director of First Peoples’ Worldwide and citizen of the Osage Nation, says there is concern that Indigenous communities will be left behind and “rights will go to the wayside”. “People are taking climate change very seriously, but not so much on the social implications for communities affected by it.”

Osprey Orielle Lake, founder and executive director of the Women’s Earth and Climate Action Network, adds that financial institutions have to have a strategy for when a community says no to renewable – and fossil fuel – proposed projects.

“Indigenous sovereignty and rights are central to a Just Transition, and must be uplifted and protected in any scenarios moving forward regarding clean energy,” she says. “We advocate for No Go policies, so that when a community decides to reject or say no to a specific harmful project or projects, financial institutions will exclude financing of any form and respect the decisions of the community.”

Nordic investment house Storebrand Asset Management is already trying to address some of what it perceives as investment risks around the treatment of native communities in the energy transition.

The NKr1.1 trillion ($113.4 billion; €110.8 billion) investor has been engaging with Eolus Vind AB on the potential impact of its Øyfjellet Wind Park. The project, currently under construction, will be Norway’s largest wind power installation, with 72 wind turbines. But, according to a report by Storebrand, it may have “a significant adverse impact on the ability of Sámi reindeer herders to carry out their traditional livelihood, which may entail a human rights violation”.

Vemund Olsen, a senior sustainable investment analyst at Storebrand, tells RI: “Right now there is a very strong push for increased renewable energy, as well as increased mining for metals and minerals, that are necessary for the green transition. But I think investors are increasingly aware that we have to be really careful in terms of doing proper due diligence to make sure that we don’t have any unintended negative impacts on Indigenous peoples.”

He points to the significance of a October 2021 ruling by Norway’s Supreme Court, which concluded that the licences for two wind farms constructed in the central Fosen peninsula were invalid.

The court determined that Sámi reindeer herders in the region had a right to enjoy their own culture and that the construction of the plants had violated that right.

“It crystallised this conclusion that yes, we need green energy, but there is a human rights threshold and Indigenous people’s rights threshold you can’t cross,” says Vemund. “I think that’s been an eye-opener for companies and investors in Norway.”

Vemund tells RI that Storebrand representatives have visited the Øyfjellet Wind Park and met with both the Sámi reindeer herders and Eolus, separately. The asset manager will require the company to carry out a proper consultation process with the Sámi to identify measures to allow traditional reindeer herding to continue and prevent further human rights violations.

A spokesperson for Eolus told RI: “The wind park will be a long-term contributor to employment, growth and development, benefiting the whole region for years to come.

“We have during the entire process tried to find amicable solutions with the local reindeer herding district and two agreements have been entered into as regards the construction phase. Unfortunately, the parties have not yet been able to agree on the operational phase. Although there is no requirement in the licence that agreements with the local reindeer herding district are entered into, we are very committed to finding a solution.”

Storebrand is engaging with another, unnamed firm over plans to expropriate reindeer grazing areas on the border of Norway and Sweden in order to mine quartz for the production of silicon. The manager also has ongoing dialogues with several Norwegian salmon farming companies who operate in Indigenous territories in Canada, it told Responsible Investor.

“In a country like Australia, where there are an estimated 250 nations and 500 distinct clan groups, with many overlapping land claims, it’s very complex and there is no off-the-shelf guide to these issues,” explains the firm’s head of government and stakeholder relations, Simon Every. He notes that the negative screening approach is now being widened to address measures that could help increase the role of First Nations people in the renewables sector and its supply chains.

“We want to lift expectations and practices around investment decisions impacting First Nations, as well as identify opportunities for First Nations businesses and peoples to participate in the clean energy sector – including identifying barriers to participation,” adds Every.

The participation of Indigenous people in the transition to a low-carbon economy doesn’t stop at goods and services – there is a growing awareness of the communities’ role as asset owners. SHARE’s Bastien notes that one of the fastest-growing groups of asset owners are Indigenous communities, who channel funds from businesses, legal claims and other sources into investment trusts. They are also increasingly buying up companies that operate in their territories, he adds.

Chris Croker, a descendant of Australia’s Luritja people and managing director of Impact Investment Partners, which invests in projects that benefit Indigenous communities in the country, says this participation is crucial.

“When you’re at the table, you’ll be heard and you can directly monitor and guide companies towards better outcomes,” he says. “It’s important that people from Indigenous communities with the local knowledge and context are the ones to develop solutions.”

He notes that, with the resource sector, there have been “bad experiences”. “We don’t want the clean energy sector to go that way. Indigenous people deserve to be involved in the green energy future.”