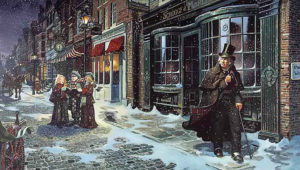 This tale begins on a “cold, bleak, biting” Christmas Eve in London. Mike Ashley, the man some in the press and UK Parliament are calling Scrooge, founder of highly successful sports apparel retailer Sports Direct, faces allegations of staff being paid below the minimum wage and controversial labour practices. There are calls for a government inquiry and the company is hit by a share price loss of 15+%, wiping hundreds of millions off his personal fortune. Ashley says it’s all “humbug”. Sports Direct issues a lengthy press release firmly rebutting the allegations. Ashley says he will personally oversee a review of business practices.
A ghost visits Ashley to tell him he will be visited by three spirits – one on each successive evening – who will reveal their visions to him, and that he must listen to them, or be cursed.
The first of the spirits, the Ghost of Christmas Past, shows Ashley dreamy scenes of earlier business years when he was kinder and more innocent and people were queuing out of the door for his sports wares.
The second spirit, the Ghost of Christmas Present, reveals several worrying scenes to the Sports Direct boss: meetings with shareholders who are complaining noisily about corporate governance issues, a finger wagging by a London hedge fund star who has backed the company, but says he is a difficult character.
The spirit tells him to be afraid: “Listen to your shareholders, and beware a visit by theUK Investor Forum, the body that brings together investors to lobby for corporate change…that could spell big trouble!”
The third spirit, the Ghost of Christmas Yet to Come, shows Ashley on Christmas Day one year later cursing a continued low share price as customers boycott the company because the review has not produced any meaningful change and press coverage is still negative.
The Ghost of Christmas Yet to Come shows Ashley a vision of a corporation in trouble overseen by a “wretched man”. The corporation’s AGM, he warns, is attended only by local businessmen if lunch is provided.
The ghost shows Ashley a headstone with the name of a now defunct company: “Sports Direct”, bought out, he says, by “a private equity firm for a song”.
Sobbing, Ashley pledges to the Ghost of Christmas Yet to Come that he will change his ways in the hope that he may “sponge the writing from this stone”.
Ashley awakens on Christmas morning with joy and love in his heart. He spends the day with staff and anonymously sends prize turkeys to their homes for Christmas dinner. The following day, he oversees a full business review ensuring fair labour treatment for all. A changed man, Ashley now treats everyone with kindness, generosity, and compassion; his customers flock back to the shop, the share price is back up, stockholders are happy, and Ashley now embodies the spirit of Christmas.