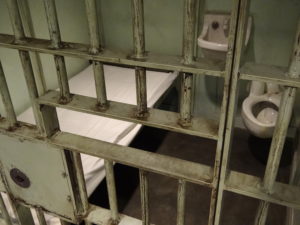 Sex and the City actress Cynthia Nixon, who is running to be New York’s next governor, slammed JP Morgan Chase, BlackRock and Wells Fargo for “propping up” private prison firms CoreCivic and Geo Group at a May Day protest in Manhattan this month.
The private prisons have come under fire over allegations of human rights abuses and lobbying for laws that benefit their business, like the detention of undocumented immigrants.
Nixon said: “This whole industry that is exploding right now is propped up by debt from these major banks and these major banks should not be investing in this human suffering.”
She is the latest high-profile New Yorker to attack those with financial ties to the controversial US private prison industry.

“What we’ve found so far is that companies simply don’t know if they have prison labour in the supply chain.” – NorthStar’s Mari Schwartzer

According to American current affairs magazine, Mother Jones, in 2016 – a year where the Obama administration looked set to end federal support of the private prison industry – a GEO Group subsidiary gave $225,000 to a pro-Trump super-PAC. It also claims GEO Group and CoreCivic donated $250,000 each to President Trump’s inauguration fund.
In 2017, the Trump administration said it would continue to work with private prisons. Geo Group and CoreCivic spent $2.6m on federal lobbying in that year, said Mother Jones. Geo Group and CoreCivic deny advocating for or against criminal sentencing or immigration policies.
Harkless says she sees clients wanting to take a closer look at the broader issue of companies using prison labour in their supply chains (a practice in private and public prisons) and the unintended consequences of this.
NorthStar Asset Management recently published a white paper titled Prison Labor in the United States: An Investor Perspective outlining its perspective on the issue of domestic US prison labour in company supply chains, and how it is a critical issue related to economic inequality, racial justice and human rights.
Julie Goodridge, CEO of NorthStar Asset Management, said: “Our country’s capitalist economy is firmly based upon the exploitation of slaves and their descendants, and our criminal justice system has always been racially-skewed towards incarcerating people of colour. Today’s prison labour is an extension of this abuse.”
The NorthStar paper describes how prison labour is enabled by the 13th amendment of the US constitution, which outlawed slavery with the exception of forced labour as punishment of crime. As a result, nearly every able-bodied inmate in the US works in some form of labour while incarcerated.While many of those inmates perform the duties of prison upkeep, the paper argues that prison labour for the creation of supplier products that enter the open market, or services provided to companies, are more pervasive than publicly acknowledged.
Mari Schwartzer, NorthStar’s Director of Shareholder Activism and Engagement, who led the firm’s multi-year research into this issue, said: “We have begun engaging with companies in our clients’ portfolios about this issue and what we’ve found so far is that companies simply don’t know if they have prison labour in the supply chain. In fact, companies were often confused by the terminology and complex nature of prison labour.”
The issue of the so-called ‘prison industrial complex’ is also coming to the attention of ordinary, socially-motivated retail investors, according to Joshua Levin, co-founder of OpenInvest. It has created an online investment platform that allows investors to customise to their values while still having a portfolio that tracks an index, he says, and has about 1,000 users managing tens-of-millions of dollars: “They can make changes in real time and respond to news events. There is full transparency on what they own. Investors can vote in shareholder resolutions with a swipe on their smartphones.”
OpenInvest highlights causal areas that one can engage on, such as climate change, gun violence and the US prison industry – a move catalysed by a US foundation which OpenInvest consulted with.
“This foundation was doing grant-making around marginalised communities, specifically the formerly incarcerated and refugees,” says Levin. “They were horrified to find out that a lot of their endowment was going into companies that they were actively funding campaigns against. It had given one grant to an activist group protesting against privately-run incarceration centres and had $70,000 in equity financing invested in the private prison running them.”
Levin claims that OpenInvest’s platform protects investors from financial risk if they choose to pull CoreCivic and Geo Group from their portfolio: “It doesn’t just strip the private prisons out of the portfolio. That would distort the portfolio away from the index. Our system instantly breaks apart the client’s entire portfolio and trades a number of other holdings that are correlated with those divested companies on every important vector, so market cap, international exposure, historical risk factors. That’s the way the system restores the client to a beta of one with the index that they are tracking. So they can weigh in on these issues and the things they care about while the technology abstracts away the financial complexity.”
OpenInvest’s platform enables its users to divest from companies who use prison labour, sell products or services to prisons or engage in lobbying efforts around incarceration; and enables them to positively screen for listed companies that have made commitments around hiring former prisoners.

This article is one of RI’s ESG Frontiers series. Previous topics to features in the series include palm oil, shipping and opioids.