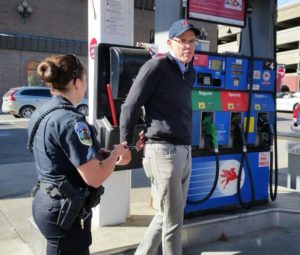 They both went to Harvard University and they are both pre-eminent in their fields. They’re both called Bill.

But one was this week arrested campaigning at an Exxon gas station in Vermont while the other used a lengthy magazine interview to explain why divestment is misguided.

The two events are connected, and not just because they are points on a spectrum about how investors should treat climate change.

Bill McKibben, whose campaigning set the ball rolling on college fossil fuel divestment, was arrested trying to publicise claims that ExxonMobil’s scientists knew for years that burning fossil fuels was causing the planet to warm. “Released, after booking on charges of unlawful trespass, which kind of seems like what Exxon did to the planet,” McKibben tweeted.

His actions follow recent investigations by the Los Angeles Times, Columbia University’s Energy and Environmental Reporting Project, and Inside Climate News suggesting the company incorporated climate change research into its operations while, in public, casting doubt on the science.

On the back of this two US congressmen are asking the Department of Justice to investigate whether the company violated the law by “failing to disclose truthful information” regarding climate change. The LA Times quoted an ExxonMobil spokesman as “unequivocally” rejecting the allegations. Suggestions that the company suppressed climate research were “completely without merit”.

Earlier, Gates this week featured in a wide-ranging article in the Atlantic, in which he came out against fossil fuel divestment per se and says there is no certainty about global warming. In the interview, he said divestment advocates are misguided if they believe it alone will make a difference.

“I worry you’re taking whatever desire people have to solve this problem and kind of using up their idealism and energy on something that won’t emit less carbon,” he said.“So broaden your message to be pro–R&D. And even the same people who are divesting those stocks of energy companies, ideally some of that money would come into this pool that is funding these high-risk innovations.” On global warming, he said: “The heating levels have not tracked the climate models exactly.” The article shows Gates has clearly researched the topic closely and his remarks reveal he has clearly considered the matter in depth.

His comments around divestment would appear to be, at least in part, a response to a campaign from the Guardian newspaper in the UK that has targeted the Gates Foundation and the Wellcome Trust over fossil fuel divestment.

And here’s the other link: that initiative (which now has 227,000 supporters) was done in partnership with McKibben’s 350.org campaign.

The two Bills, coincidentally, both went to Harvard, which has of course faced its own battles over fossil fuel divestment. Although Gates dropped out to found Microsoft in 1976, McKibben stayed on to become editor of the university newspaper the Harvard Crimson before going on to a career in journalism and environmental campaigning.

The strength of feeling around the whole issue was demonstrated yesterday when more than 150 students at Columbia University in New York pledged to engage in “civil disobedience” such as hunger strikes and sit-ins unless it divests its $9.2bn endowment from the top 200 publicly traded fossil fuel companies. It is inspired by a similar pledge launched last week by Fossil Free Stanford.

And to top what has been an interesting week in the climate change debate, just today (October 16) a group of oil and gas companies under the ‘Oil and Gas Climate initiative (OGCI)’, has expressed their “collective support for an effective global climate change agreement”. Signatories to the letter include BG Group, BP, Eni, Royal Dutch Shell, Total and others, but not ExxonMobil.