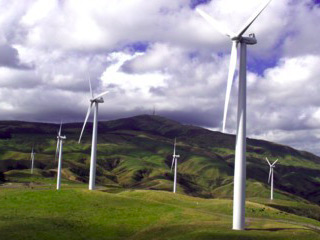 Dutch giant pension funds ABP and PGGM have joined financial services groups Delta Lloyd and Rabobank in investing up to €500m in a new fund for sustainable energy infrastructure projects.
On September 24, Responsible Investor revealed that ABP, the €221bn ($311bn) pension fund for Dutch civil servants, was planning to invest €100m in a renewable energy infrastructure fund with Triodos, the Dutch sustainable bank in which it owns a 5% joint stake with PGGM, its €86bn fellow Dutch pension fund giant.
The pension funds have now confirmed they will each invest €100m in the Ampère Equity Fund, which is being managed by Triodos and will invest in wind parks on land and at sea and biomass power stations in various western European countries.
Evelop, a European sustainable project developer, will manage the majority of the projects using financing from the Ampère fund.
The Koegorspolder wind park in the Dutch province of Zeeland, one of the largest wind-power sites in the Netherlands, is expected to be the first project to be financed by the Ampère Fund.
Evelop said it had worked with ABP and PGGM for more than a year to createa customized financial and legal construction for the fund. The funds’ investments will take the form of an equity stake, which will be triggered when a project meets certain conditions.
Roderick Munsters, chief investment officer at ABP, said: “Our investments in large-scale, sustainable energy projects are a good match with a series of other investments – in micro-credit, clean technology, sustainable forestry in Mozambique and in the Climate Change Capital Carbon II Fund. These investments yield good stable returns for the participants in our pension fund. Moreover, with these investments we are contributing to human well-being and the environment in the long-term. So we are very proud of Evelop’s truly sustainable initiative.”
In June this year, ABP and PGGM announced a joint €500m investment in a private equity fund of funds structure focusing on companies in renewable energy and clean technology. It was one of the largest ever such placements by institutional investors on the private equity market.
The two funds also recently upped their stake in Triodos to more than 5% of the company’s stock when the bank issued over a million new shares.