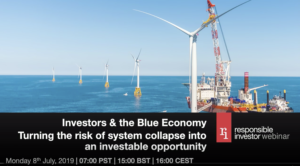 She was speaking on an RI webinar on the topic of Investors and the Blue Economy. Kuhlow said the ocean economy, if managed sustainably, had enormous economic opportunity (estimated at $24trn in assets, with an annual revenue of $2.5trn), but this was at risk from a range of issues such as pollution, overfishing and climate change.

The ‘blue’ principles are a set of 14 commitments to help investors support sustainable oceans, and highlight the material benefits of marine conservation. It includes commitments that investments will be transparent, as well as diversified – acknowledging the importance of small to medium businesses within the ocean economy.They intend to support, in particular UN Sustainable Development Goal (SDG) 14 – Life Below Water, though Kuhlow said contributing to a healthy and sustainable ocean supported all 17 SDGs.

Also speaking on the webinar was Anders Nordheim, Lead, Ecosystems and Sustainable Land Use at the UN Environment Finance Initiative (UNEP FI). He said there had been change in interest from financial institutions towards the issue over the last few years, but said there was very little information to guide them.

Nordheim gave details on UNEP FI’s “Sustainable Blue Economy Finance Initiative” (housing the blue principles) that would act as a community for those wanting to work collaboratively on the issue.

He said it would involve regular calls and meetings, and could lead to a taxonomy or guidance on sustainable blue investments.

As part of a new research project dedicated to SDG 14: Life Below Water, RI has launched a survey to collect information on investor awareness on the blue economy. The new survey will take around 5-7 minutes to complete, and answers won’t be attributed. Participants will be given access to the findings.