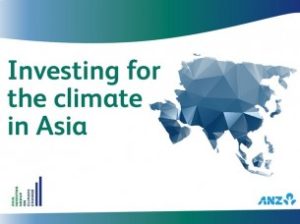 Asian banks, investors and insurers are rapidly taking steps to put climate risk awareness and responsible investment into their businesses in anticipation of the $7.7 trillion investment in green finance required to meet the energy demands of China, India, Japan, and South-East Asia under a 2°C warming target between 2014 and 2035, according to a report by the Asia Investor Group on Climate Change (AIGCC).
The review of 88 institutions – 36 banks, 30 investors, and 24 insurers – finds that 31% factor climate change risks into their financing operations. It says 61% of the banks refer to green products in their ranges and 56% provide some quantification of their exposure to climate issues.
Over a quarter of the banks refer to climate change factors as a reason to limit financing and 81% disclose a policy on responsible lending.
Emma Herd, CEO of the Investor Group on Climate Change (Australia and New Zealand) part of the Global Investor Collaboration on Climate Change (GIC) collaboration of four regional investor groups that includes AIGCC – Asia, IIGCC – Europe, and Ceres INCR – North America, said: “The finance sector has recognised this opportunity and is gearing up fast. While it’s clear that progress is uneven and gaps remain, such as a need for greater focus on climate risk in investing, progress over the past two to three years has been remarkable. There’s no doubt that a great transition is on.”
The report says the pace of change is well illustrated by China, whose banks, it says, have been restricting finance to industries with high-energy consumption, high and excess pollution. It says they also provide quantified information on financing for green activities,and receive related regulatory support through Green Credit Guidelines from the China Banking Regulatory Commission (CBRC) and green bond standards from the People’s Bank of China (PBOC) and the National Reform Development Committee, both launched in 2015. To meet the two degrees CO2 emission reduction goals, across all markets carbon-intensive sources of energy must decrease and renewables must grow. China and India are in the spotlight as both obtain more than half of their primary energy from coal. However, the report notes that the major Asian markets have seen significant growth in renewables over the last few years. Solar stands out with its strong growth, which was highest in China (70% increase in solar production in 2015 over 2014 to 39 terawatt hours (Twh)). Japan’s figure grew 59% to 31 TWh and India’s 51% to 6.6 TWh in the same period. The report also examines growth in the respective green bond markets.
However, the report, titled ‘Investing for the climate in Asia’, undertaken by Asia Research and Engagement (ARE), says that across the 12 markets it reviews, the level of regulatory involvement is mixed: five countries have banking initiatives, four have sustainability codes and five include sustainability disclosure within stock exchange listing rules.
AIGCC’s founding members include Cathay Financial Holdings, BlackRock, Armstrong Asset Management, AustralianSuper, Generation Investment Management, Brawn Capital, International Financial Corporation and Impax Asset Management.
The report can be downloaded here