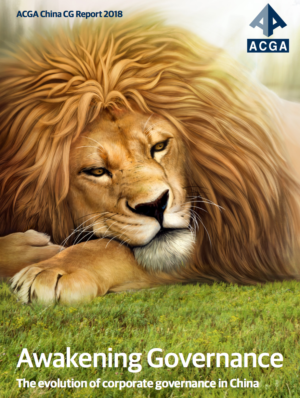 Foreign investors need to pay closer attention to how corporate governance is practiced in China, in order to push companies to take it more seriously. That is one recommendation included in Awakening Governance: The evolution of corporate governance in China, a report issued by the Asian Corporate Governance Association (ACGA) last week.
The Hong Kong-based association regularly tracks proxy voting and other forms of engagement across the region. It said the ongoing development of corporate social responsibility (CSR) reporting in China requires Chinese companies to have a greater understanding of its intrinsic value.
“For investors, such value is reflected in the increasing relevance of ESG data in guiding the market and shaping investment decisions. This is no longer a PR exercise (for Chinese companies),” said the report.
The main part of the ACGA report examines “CG with Chinese characteristics”. Jamie Allen, secretary general of the ACGA, told RI it was fair for foreign investors to question “how does corporate governance even work in China?”
It does work, he said, but not in a way that a foreign investor would recognise. “It’s a form of party control, very hierarchical. Boards are subservient to party committees, where the chairman and the senior appointments are not made by the board, but different departments of the Communist Party.”
While China has moved to reflect global standards in its approach to regulating on corporate governance, Allen said it is disappointing that the country’s largest domestic investors are not taking more of a lead.
“In China you’ve got the National Social Security Fund, which hasn’t become a particularly active owner,” said Allen. He suggested the NSSF, with over $250 billion of AUM, could provide the sort of lead Japan’s Government Pension Investment Fund has with its adoption of clear and strong stewardship principles.
Despite that lack of leadership, the changing nature of China’s attitude towards corporate governance was reflected in this year’s revised code of CG for listed companies by the China Securities Regulatory Commission (CSRC), the first revision since 2002.
While the ACGA report said it is difficult to predict what this means in terms of change over the short term, it contends that companies and domestic investors need to see corporate govenrance and ESG as tools rather than just rules.

For their part, foreign investors need to view CG, “as something more nuanced than a division between ‘shareholder unfriendly’ SOEs [state owned enterprises] and ‘exciting but risky’ POEs [privately owned enterprises]. We recommend foreign asset owners spend more time on the ground in China and invest in studying China’s corporate governance system.”
CSR reporting is a key area highlighted by the ACGA report as needing more quality. Rising global standards have not encouraged mainland Chinese firms to improve their reporting practices. The report notes that, for example, that EU guidelines for larger companies to disclose ESG information on a ‘comply or explain’ basis have not had a direct impact on China to date, unlike in Japan.

Certain industries are improving their CSR reporting, including finance, power, transportation, chemicals, pharma and electronics. According to ACGA, the best reporters include PetroChina, Ping An, Baosteel, Shanghai Pudong Development Bank (SPDB) and Sinopec.Overall though, fewer than 5% of 2016 CSR reports were assured by an independent party. There is no regulation governing this and companies are not incentivised to do it voluntarily. The report said the poor quality of CSR reporting is owing to the fact that many reports avoid important issues and dwell on non-core activities such as charitable work. Where they do contain detail of CSR work, the reports only report the good news. They do not discuss negative ESG events, or at best touch on them only slightly.
Qian Minwei, assistant director in the research department at Aegon-Industrial Fund, commented, “Currently, the CSR reports of listed companies in China have little reference value for investors because they are full of positive issues,” and as such they do not address the problems they have faced and what is the potential impact of their business on third parties.”
An evaluation of CSI 100 index companies carried out in 2017 by SynTao tracked disclosure on 20 key indicators. The average disclosure level of 41% (just over 8 out of 20 indicators across the index) reflected a wide range in the quality of reporting. While SPDB (Shanghai Pudong Development Bank) achieved 85%, the lowest score was 5%.
The coal mining, telecoms and oil and gas sectors ranked first second and third, all with ratings above 60%. The finance industry was only just above the average, at 44%, with internet and software industries bringing up the rear on just 10% disclosure.
ACGA concludes that companies consider such reporting is unimportant. The problem is compounded by a lack of understanding by the public, by investors and the media. As such, CSR has virtually no brand value in China, said ACGA.
On the environmental front, the emergence of green finance in China has given the banks, companies and their investors a focus for the adoption of stronger reporting and environmental regulatory compliance. Since the introduction of a broad environmental protection law in 2015, the Chinese government has issued, or is in process of formulating, specific laws and regulations on atmospheric, soil and water pollution.
Enforcement has been good, with the Ministry of Environmental Protection (MEP) reporting that between 2014 and 2016, the number of administrative penalty cases increased by 50%, from 83,000 to 124,000. The monetary penalties doubled over the same period, to Rmb6.6 billion.
China’s green finance initiative kicked off in earnest in 2016 with its inclusion in the 13th Five-Year Plan and establishment of innovation pilot zones in five key provinces. The ACGA notes that these policies are having an effect as related ministries start to take action. In June 2017, the MEP and the China Securities Regulatory Commission signed an agreement to promote a mandatory environmental disclosure system for listed companies.
ACGA notes that institutional investors are increasingly demanding information relating to the ESG performance of listed companies, especially in environmentally sensitive industries. In addition, ratings agencies and index providers want more information to allow companies to be included in an index.
At this stage, a clear information deficit exists, forcing investors to rely heavily on incomplete or worse, misleading data. To address the challenge, ACGA recommends investors to strengthen communication with listed companies and stakeholders around ESG issues.