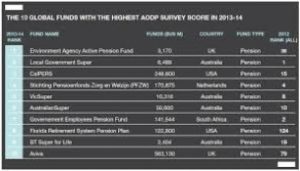 The majority of the world’s major retirement funds, insurance companies and sovereign wealth funds are ignoring the risks that a carbon bubble could present to their portfolios, concludes the Asset Owners Disclosure Project in its 2013-14 Global Climate Change Investment Index, unveiled at the RI Americas this week in New York, organized by Responsible Investor. On a brighter note, the report also finds that the handful of asset owners who typify best practices in their integration of carbon considerations have accelerated their efforts in the past year. The report is AODP’s second, and draws from information requests the Sydney, Australia-based nonprofit sent to the world’s 1,000 largest asset owners, including over 800 pension funds, 80 insurance companies, 50 sovereign wealth funds and 30 foundations and endowments. The Global Climate Change Investment Index rates the 458 funds about which AODP received adequate information, or gives an x-rated mark to those where no public information on climate change responses can be found. Ratings signify how AODP expects a given fund would fare in the still-hypothetical event that a global agreement on greenhouse gas reductions is reached that mandates a significant share of the world’s fossil fuels be left underground, wreaking havoc on the value of companies represented across asset owners’ portfolios.
“We know that most funds are operating on a business-as-usual scenario,” said AODP executive director Julian Poulter, speaking at the RI Americas event in New York, which was attended by more than 300 investors, including more than 40 asset owners: “We think once we’ve pushed the disclosure window further forward, a business-as-usual scenario is a pretty unlikely one.” In calculating the rankings, the index’s authors focused on five categories: transparency, risk management, investment chain alignment, active ownership and low-carbon investment.Only five funds received a rating of AAA or higher, and another 22 earned an A rating—meaning 6% of the 458 funds evaluated would survive a carbon crash relatively unscathed, in AODP’s estimation. The five top-performing funds were the U.K.’s Environment Agency Active Pension Fund, Australia’s Local Government Super, the U.S.’s CalPERS, the Netherlands’ Stichting Pensioenfonds Zorg en Welzjin (PFZW), and Australia’s VicSuper. To distinguish poor from worse among the numerous stragglers, AODP carved out a new category this year: X-rated, or “unsuitable for young pension beneficiaries,” said Poulter at the conference. The schemes that appear to be doing nothing to manage their carbon risk are met with an “X,” and nearly 40 percent of rated funds are rated this way. Another 40 percent receive a “D” grade, meaning 80 percent of funds in the index are in the “laggard category,” Poulter said, adding that “a crisis of transparency still exists” among asset owners. The better news out of this year’s index came from those funds who comprised the leaderboard. “Leaders have become ‘active’ pension funds,” Poulter said, explaining that they’re not relying as heavily as they have in the past on indexing and consultants as they step up their efforts to account for the eventual risks that carbon-heavy portfolios could present. These funds are also demonstrating that “low-carbon doesn’t mean lower performance,” Poulter added. In late September, AODP launched a social media platform called The Vital Few, which encourages pension fund members to engage with the plans that represent them. In a pilot project, AODP helped members write to their funds to ask how they’re accounting for carbon risk. Poulter said this is how he believes the AODP’s findings will be best used: in the hands of NGOs and individual activists who use it to open conversations with major asset owners. “This isn’t about morals or ethics,” Poulter said, “This is about portfolio risk management.”