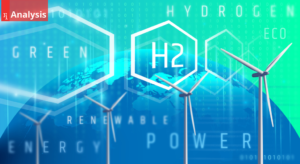 In 2002, American economic and social theorist Jeremy Rifkin predicted the era of fossil fuels was passing, and a new age of hydrogen would replace it. Eighteen years later, is a sustainable hydrogen economy finally ready to take off, and offering investors another alternative to oil & gas stocks?

There are promising signs. While most hydrogen is currently the ‘grey’ kind, generated from fossil fuels (there is also ‘blue’ hydrogen from natural gas), it’s green hydrogen that has taken the world by storm in 2020. Yong Por, a Research Manager at the Asia Investor Group on Climate Change, describes the technology as “the hottest thing in the energy space”, and Goldman Sachs predicts that, by 2050, green hydrogen will be a €10trn market, just within utilities.

Bill Gates’ Breakthrough Energy network is one of the organisations throwing its weight behind a European Green Hydrogen Acceleration Center, which supports the development of the green hydrogen economy – something it claims will be worth €100bn a year by 2025.

‘In order to achieve the green hydrogen vision of the EU by 2030, half of the investment required to scale up initially is actually going to be on dedicated renewable energy capacity’ – Mark Lewis, BNP Paribas Asset Management

In July, the EU launched a Hydrogen Strategy for a Climate-Neutral Europe, which Por characterises as the sector’s “Marshall Plan”, pledging to invest, regulate and stimulate the growth of green hydrogen in order to meet the ambitious European Green Deal.

China is also positioning itself as a major player in the development of hydrogen, with Fatih Birol, Executive Director of the International Energy Agency, warning Europe not to “repeat the mistakes of the past that we saw with solar manufacturing”, when China monopolised the market with cheap, cutting edge products, putting European counterparts out of business.

But, with such staggering falls in renewable energy costs in recent years, why is there suddenly so much political will to develop another source of green energy now?

“Hydrogen is a complement to renewables,” explains Mark Lewis, Chief Sustainability Strategist at BNP Paribas Asset Management, pointing out that “there are some activities that it will not be possible to electrify using renewable energy directly, like industrial feedstock or large-scale passenger aviation; so think of green hydrogen as indirect renewable electricity that we use when we can’t directly electrify something”.

Alongside this, seasonality and geographical limitations mean solar and wind simply cannot offer a constant, stable, reliable power supply without developments in storage.

Indeed, Lewis argues that there is no plausible pathway to Net Zero by 2050 unless green hydrogen becomes a commercially viable industrial feedstock by 2030, and an energy source thereafter.

But experts at S&P Global Ratings recently warned that – despite the hype – there isn’t currently a “sufficient economic rationale for [green] hydrogen to play a big role in the [European] electricity mix”. Just like renewables in the early 2000s, the technology faces major price barriers, with production costing around double that of blue hydrogen. Although – also just like renewables – it’s predicted that there will be huge price drops (64%, by some estimates) over the next two decades. And, because about 50% of the costs involved in green hydrogen come from the cost of the renewable energy that generates it, further falls in solar and wind will have a knock-on effect, too.

The parallels between conventional renewables and green hydrogen are helpful, says Lewis, who was formerly a utilities analyst for Barclays and Deutsche Bank: “The good news is we know how to build up and scale up a new industry from scratch”. However, he warns that subsidies and other incentives for conventional hydrogen need to be stopped to make it happen.

In the run-up to the EU launching its Hydrogen Strategy, fossil fuel companies including Equinor, ENI and ExxonMobil – all members of a Clean Hydrogen Alliance – told the European Commission that green hydrogen would not “be enough to develop a commercial market for clean hydrogen in the next decade”, adding: “Hydrogen from natural gas with carbon management technologies such as CCUS and pyrolysis will be needed to create the necessary scale and make hydrogen applications cost-competitive”. In other words, abated blue hydrogen.

The EU ended up committing €11bn to retrofitting half of existing fossil-based plants to make them fit for blue hydrogen production.

For the raft of institutional investors that have committed to support the Just Transition, this approach may be a palatable way to repurpose conventional energy plants to avoid closing down big sites – and often big local employers – altogether. But it’s a controversial move, with many campaigners arguing that the adoption of blue hydrogen as a transition fuel is nothing more than greenwash from the fossil fuel industry. NGO Global Witness calls it a “sham solution” and “a myth created by fossil fuel companies to maintain their economic interests”. And the German Government insists that “only hydrogen produced on the basis of renewable energies is sustainable in the long term”.

So how can investors get involved?

It’s still early days when it comes to allocating capital to green hydrogen, although development bodies like the European Investment Bank are wading in to de-risk investments in companies working in the space, and there are some dedicated funds (former Shell and Exxon bigwigs JJ Traynor and Richard Hulf are in the process of launching one).

But there is an engagement angle, Lewis explains. Pushing incumbent energy firms and producers to commit to becoming Net Zero by 2050 and introducing the appropriate measures to achieve that “is going to mean having some form of green hydrogen commitment”, he says, adding that BNP Paribas is in the early stages of engaging with firms on how the technology could be used to support these commitments.

More broadly, he emphasises the need for investors to encourage companies and regulators to invest more in renewables, saying: “In order to achieve the green hydrogen vision of the EU by 2030, half of the investment required to scale up initially is actually going to be on dedicated renewable energy capacity.”

Although Rifkin’s utopian vision of a Worldwide Hydrogen Energy Web in which “millions of end-users will connect their fuel cells into local, regional and national hydrogen energy webs, and create a new decentralized form of energy production” may not be what the future holds, green hydrogen seems to have finally grabbed the attention of policymakers, investors and firms alike.