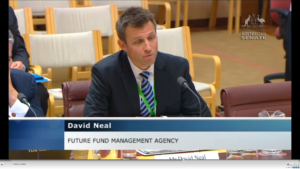 Waters asked whether he felt it was relevant to his role to look at the exposure of both the fund and the fossil fuel companies it is invested in to ‘stranded assets’. Neal answered that “these kinds of risks” are integrated into the fund’s investment decision making.

He said: “We expect our investment managers that we employ on our behalf, who choose the particular stocks to invest into, will have regard to all the risks impacting the sustainability of the business, the quality of the business and the flow of future earnings into that business. So it is their job to understand all of the various impacts, whether they be climate change impacts, regulatory impacts, taxation impacts or political impacts.”

He went on to say: “When we are trying to understand what the potential risks to our portfolio might be in the future—and incorporate them into prices of investments—that means that we value both a coal company and a wind farm using the same approach.”Waters also pressed Neal on why the fund doesn’t disclose its level of fossil fuel investment. He responded that he didn’t know “how to tell you what our exposure is to climate change in a number or in a statement”.

“That is an incredibly complex question.” There was “no way of trying to boil that down into a number” and attempt to do was “unhelpful” and possibly “misleading”. He dismissed the value of participating in the Asset Owners Disclosure Project (AODP).

Neal told Waters that the fund had discussed climate change internally, though that exact phrase has not appeared in board minutes. This follows a Freedom of Information request from the AODP asking for any minutes referring to climate change.

Neal did make the point that the fund has a number of private market investments in renewable technologies. It has some Western Australian wind farms in its portfolio: “We have wind farms in many countries around the world.”

Neal stressed that the fund expects its investment managers to engage with companies and “have regard to all of the social, environmental and governance issues that you would expect them to do”.