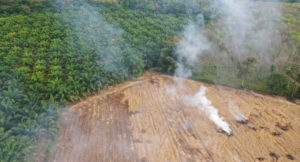 AXA Investment Managers has banned investment in companies behind major biodiversity damage linked to the production of the world’s soy, beef and timber.

The French asset manager has expanded its 2014 palm oil policy, turning it into a Ecosystem Protection and Deforestation policy which excludes firms that “face significant land use controversies and are responsible for biodiversity loss in relation to soy, cattle and timber.”

It will engage with high-risk firms on the use of more sustainable practices under the new framework, which Véronique Andrieux, CEO of WWF France, described as “a most needed step ahead, that sends a strong signal to markets and public policymakers”.

However, in a report released this week, other investor heavyweights including BlackRock, ABN-AMRO, Rabobank, Standard Chartered, Citigroup, Lloyds and JP Morgan, were accused of “turn[ing] a blind eye to human rights abuses in their palm oil supply chains” by NGOs.

The report assesses the human rights and environmental impacts of palm oil plantations in Indonesia, tracing connections to “downstream companies and financiers that either invest in them or trade, process, manufacture or sell consumer goods made from their palm oil”.

Rabobank, a major agricultural lender, told RI it had “taken note of this report and will take the time to study its key findings”. It said it only financed the palm oil sector “on strict conditions” and required clients to be members of the Roundtable on Sustainable Palm Oil.

“In general, we prefer to help clients make the right decisions, and nudge them towards a sustainable way of working also by means of our financial instruments, instead of walking away from the problem and the client,” the spokesperson continued. “However, we are not naïve in our beliefs: we have ended relationships with a major client in palm oil… [and] we have been rejecting companies that requested financing at Rabobank on the basis of them not wanting to join RSPO and abide by their policies in the past.

"In general, these perspectives from NGOs help us in our engagement with clients. It might not add positively to our reputation, but it does help our strategy of engagement to better sustainable practices, which is ultimately our goal."

Fellow Dutch bank ABN-AMRO pointed out that it already plans to withdraw from trade financing activities in Asia as part of its strategy to stop financing trade commodities and exit corporate lending outside Europe.

A spokesperson for JP Morgan Chase said it could not comment on individual clients, and pointed to its Environmental and Social Policy Framework.

BlackRock declined to comment, but highlighted its ongoing work on natural capital.

Standard Chartered, Citigroup and Lloyds had not responded to a request for comment at the time of publication.