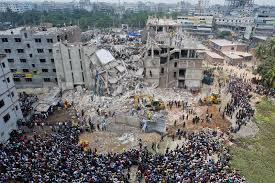 Walmart has now kicked into damage control. In both cases, the company was found to be producing from grossly unsafe factories. In both cases, the company has distanced itself from suppliers, citing the much abused complex subcontracting web. It continues to make its supplier policy more stringent, with limited action on its own part. It failed to sign up to the Accord on Fire and Building Safety, an extension of its publicly touted statement on the financial feasibility of upgrading Bangladeshi factories in 2011. A shareholder proposal by a former Bangladeshi factory worker to comply with the Accord and ensure more transparent and timely action for its supply chain was voted down by the Board in June 2013. Serious gaps mark the company’s performance. The Tazreen Factory was audited in May 2011 with ‘higher risk violations’ even as media reports point out that five licensors continued to source work to Tazreen in 2012. The company addresses fire risks in Bangladesh specifically in its Ethical Sourcing Program. But post the Tazreen fire, it emerged that fire and electrical safety was only partially covered in its guidelines and needed an upgrade. The Ethical Sourcing Program document dated January 2012 has detailed guidelines that can enable factories to comply with environmental and social sourcing.Among other things, it directs suppliers to disclose all factories and subcontractors involved in the manufacturing process. Walmart then determines the scope and nature of audits. Costs are to be borne by suppliers, placing the financial and execution liability of sustainability on its suppliers. Further, Walmart’s disclosure processes are carried out on-line, guaranteeing global access but not guaranteeing coverage in poverty-ridden Bangladesh with internet access limited to only 3.5% of the population. Walmart’s response to the two accidents once again makes the suppliers accountable. From three chances earlier, suppliers will now face a ‘Zero Tolerance’ policy regarding undisclosed subcontracting. Suppliers are required to station employees in countries with subcontracting operations to ensure compliance. Statements from Walmart’s management circulating in media sources make the company sound like a victim of shoddy suppliers as opposed to an active stakeholder. Rajan Kamalanathan, Walmart’s vice president of ethical sourcing stated “We want the right accountability and ownership to be in the hands of the suppliers” and that “We are placing our orders in good faith.”

Radhika Mehrotra is an Analyst, Stakeholder Engagement at Solaron Sustainability Services in India.