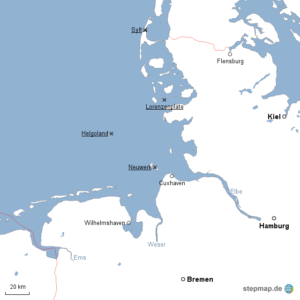 Ten international banks have put up just under €1bn for an offshore German wind farm operated by Canada’s Northland Power.

Toronto-listed Northland, which has former Canadian Prime Minister and Finance Minister John Turner on its board, said the 252MW Deutsche Bucht project in the North Sea has reached financial close. It comes after it finalised the acquisition of the project from Highland Group.

Around 75% of the project’s costs will be provided from a €988m non-recourse construction and term loan and related loan facilities from 10 international commercial lenders, it said – adding the financing was “oversubscribed”.
The lending group comprises Banco Santander, CIBC, Commerzbank, Helaba, KfW IPEX-Bank, National Bank of Canada, Natixis, Rabobank, Société Générale, and Sumitomo Mitsui Banking Corporation. The total estimated project cost is approximately €1.3bn.
The project, known as DeBu, follows Northland’s existing North Sea projects Nordsee and Gemini. In total they will its offshore net operating capacity to over 900 MW over the next three years. DeBu is located 95 km north-west from the island of Borkum in the German North Sea.

“This is a further opportunity for us to contribute to the success of the Energiewende [the German energy transistion],” said Markus Scheer, member of the Management Board of KfW IPEX-Bank.It’s the latest in a spate of deals where banks have backed wind projects. Earlier this month Mainstream Renewable Power’s Chilean Joint Venture, Aela Energía, announced $410m in project financing for two wind farms in Chile with a combined capacity of 299MW.

The project financing will be provided by a group of multilateral and commercial banks including Inter-American Development Bank and its member affiliate Inter-American Investment Corporation (IADB–IIC), Mitsubishi UFJ Financial Group, Sumitomo Mitsui Banking Corporation, Korean Development Bank, Caixa, and KfW and Banco Santander as VAT lender. The length of financing is for 18 years.

Meanwhile Glennmont Partners, formerly BNP Paribas Clean Energy Partners, has announced a £150m refinancing of its Sleaford Renewable Energy Plant – a biomass plant in eastern England – on behalf of its clean energy fund, Glennmont Clean Energy Fund Europe I. The financing has been placed to an unnamed “large European institutional investor” and Glennmont said it’s the largest institutional-only financing in the UK biomass sector to date.