Victims of the Australian bushfires are the latest to have filed a complaint against banks using the OECD human rights grievance system, challenging ANZ Bank over its role in financing climate change – not long after indigenous women filed against Credit Suisse for alleged human rights abuses.

The complaints highlight the growing pressure on banks to better consider social and environmental issues. Another grievance, lodged against ING Bank over palm oil financing, will be further examined after an initial assessment.

He said: “Guidance documents from the OECD in the past years [2017 for institutional investors and 2019 for banks in their corporate lending] have highlighted and clarified the responsibilities of financial sector actors to prevent contributing to adverse social and environmental impacts.”

"We are confident that our filing and engagement will expose the dangerous loopholes that allow banks and businesses to act with impunity over our cultural survival, climate and future."

It’s the first case filed with the US’s OECD National Contact Point (NCP) – which is hosted by the US Department of State – since a peer review last year recommended more effort to encourage companies to participate in mediation.

The NCP system is a method by which issues can be highlighted under the OECD’s ‘soft law’ mechanism Guidelines for Multinational Enterprises.

Corporates were the original target of NCP cases, but in recent years the finance sector has come onto its radar after a test case was brought by a group of NGOs against Norges Bank Investment Management.

Following a Swiss NCP complaint over the Dakota Access Pipeline, Credit Suisse last year included the protection of indigenous rights in its guidelines on project finance. At the time, campaigners said the bank needed to broaden its policy to all types of finance.

The new complaint at the US NCP focuses on the violation of indigenous people’s right to free, prior and informed consent in corporate finance, as well as Credit Suisse’s continued financial of fossil fuels. 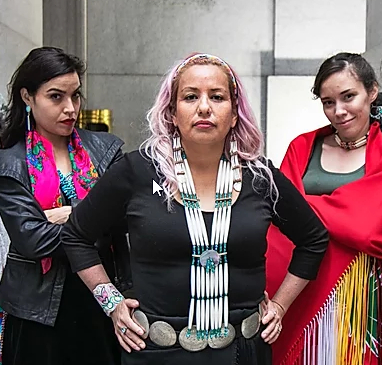 Credit Suisse complainantsMichelle Cook, a human rights lawyer and co-director of the Indigenous Women’s Divestment Delegations, said: “We are confident that our filing and engagement will expose the dangerous loopholes that allow banks and businesses to act with impunity over our cultural survival, climate and future.”

The complaint raised about Australia’s ANZ Bank relates to its financing of fossil fuel projects in the wake of devastating wild fires in the country, whose severity has been widely attributed to climate change. The case, filed by Australian Bushfire victims and Friends of the Earth Australia, alleges that ANZ has failed to adhere to the Paris Agreement reduction targets across its lending portfolio. The complaint also says the bank’s failure to disclose the full extent of carbon emissions through its lending is a breach of OECD Guidelines.

Jack Egan, one of the co-complainants, whose home in coast New South Wales was destroyed in recent bushfires, said: “I’m joining this climate case again ANZ so we don’t have to go through these disastrous fires every year. We are not seeking damages or compensation from ANZ. I just want them to stop fuelling dangerous climate change.”

An ANZ spokesman said: “We met with representatives of the group. We have received their complaint and are currently reviewing their claims.”

He added that ANZ Bank was reducing its exposure to thermal coal. “We have also been working closely with our largest emitting business customers to support them with their plans to transition to a low carbon economy,” he said.

This is the second climate-related OECD Guidelines complaint against a bank, following a case against ING bank which resulted in ING committing to a number of climate objectives. The bank will  face new examination under the OECD mechanism after the Dutch NCP recently accepted a complaint filed against it over alleged human rights and environmental abuses at palm oil plantations in Liberia and Asia.

One of the complainants, Friends of the Earth, says the OECD case marks the first time a company is accused of ‘contributing’ rather than being ‘linked to’ wrongdoing, because of ING’s financing of palm oil companies and its failure to conduct effective due diligence or prevent or mitigate the impacts. ING refutes the allegation in a statement available here.

Friends of the Earth Netherlands, Indonesia and Earth Liberia have asked the Dutch NCP to mediate and, if necessary, decide if ING is adhering to its own CSR policy.

In a statement, ING said it had accepted the Dutch NCP’s offer to facilitate dialogue with Friends of the Earth. It also said ING didn’t finance palm oil plantations but provided general finance to a select group of palm oil companies that undergo enhanced environmental and social risk due diligence.

A complaint has also been raised against Korea Export Import Bank over the collapse of a dam collapse in Laos, but it was rejected by the Korean NCP.