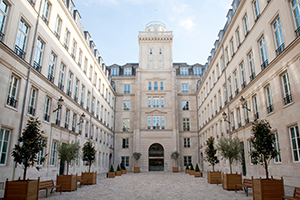 French research house Beyond Ratings has applied to become the world’s first credit ratings agency to integrate environmental factors into all of its ratings.
The Paris-based firm, which was set up in 2014, specialises in analysing the default risk of sovereign issuers globally, with an enhanced focus on risks from energy and climate policies. In addition to its financial assessment, Beyond Ratings also offers non-financial ESG analysis. Current clients include French pension fund ERAFP and a number of undisclosed pension funds, asset managers and insurers in France, the US, the UK and the Nordics.
To be able to perform full credit ratings – which use both qualitative and quantitative analysis – companies in Europe must be approved and regulated by the European Securities and Markets Authority (ESMA). Because it doesn’t have this status, Beyond Ratings has so far provided credit ‘scores’ – using solely quantitative data to establish default risk. It uses the traditional framework for credit ratings, but adds an additional pillar addressing the impact of energy, climate and natural resources on the creditworthiness of a country.
But it is now in the process of applying to ESMA to secure approval to be a credit ratings agency.
Supported by grants and loans from the French Global Environmental Fund and France’s development bank, Agence Française de Developpement (AFD), Beyond Ratings plans to widen its rating capabilities to include qualitative assessments, and broaden from the 85 sovereigns it currently rates to 140 by October, before rolling out to sub-sovereigns and public entities within 18 months. Eventually it will also expand to cover corporates.
“With the help of the sponsors, we have designed a programme that will allow us within the next 18 months to make the transition towards a fully-fledged financial credit ratings agency,” Beyond Ratings’ CEO and co-founder Rodolphe Bocquet, told RI. Bocquet spent seven years as an equity derivatives specialist at Société Générale before qualifying in environmental engineering and working for public bodies including AFD.If ESMA accepts the application, Beyond Ratings will be the only official CRA to explicitly and systematically assess climate risk in its credit ratings. Moody’s and S&P Ratings both offer ancillary services to investors on the topic, such as green bond assessments, but none have a formal commitment within their methodologies to assess environmental issues.
The move comes at a time when ratings agencies are in the spotlight over their role in identifying long-term risks. Following widespread criticism about their behaviour in the run-up to the 2008 financial crisis, in which they did not identify the macro risks of the subprime mortgages boom, they are now the subject of a PRI initiative to promote the integration of ESG considerations into ratings. They are also under discussion as part of the High Level Expert Group on Sustainable Finance (HLEG) – a market-led body that will make regulatory and policy recommendations to the European Commission later this year on how to improve sustainability and long-term financial stability.
In addition to its mission to integrate environmental factors more thoroughly into financial ratings, Bocquet says Beyond Ratings’ bid for CRA status has generated interest and financial support for two other reasons. Firstly, it will charge investors, not issuers, for the ratings, saying this is a more credible way to produce assessments without conflicts of interest.
Secondly, it wants to make the methodology of the ratings public, reviewed regularly by an expert committee. “We consider sovereign ratings to be a public good – they have so much influence on the way states can finance their investments, so we don’t think it’s right to let sovereign ratings be the remit of privately-held companies that don’t report to anyone beyond their own shareholders. We want to create a new governance model involving all stakeholders. That’s another reason we are getting support to develop this strategy over the next 18 months.”
Once the strategy is finished, Beyond Ratings will fundraise in the institutional markets. Bocquet said he expects to have an initial target of around €5m of debt and equity in order to expand its team and remit.