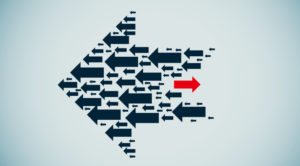 A number of big investment names have been keen to see weaker sustainable finance regulation in Europe, and an overwhelming majority of trade bodies have lobbied to “dilute and delay” new EU rules, despite giving “high-level support” to the efforts, lobbying NGO InfluenceMap has alleged in a new report.

In total, only 5% of 63 financial institutions were found to have provided strategic support for the EU’s plans

The European Fund and Asset Management Association, the Association for Financial Markets in Europe, the European Banking Federation and PensionsEurope are among those alleged to have “intervened to weaken and delay proposed EU legislation”, according to the report. InfluenceMap said that only one out of 20 industry bodies analysed was in favour of a more progressive approach: the Institutional Investor Group on Climate Change.

The analysis also identified BlackRock, Invesco, UBS and BNY Mellon among the asset managers “most in favour of weaker regulation”. The report described the findings as “notable”, citing the recent selection of BlackRock to advise the European Commission on integrating ESG factors into banking regulation.

In total, only 5% of 63 financial institutions were found to have provided strategic support for the EU’s plans under its Action Plan on Sustainable Finance. The report said that while the majority of financial institutions had indicated high-level support for the proposals, they did not engage “at the critical and tactical level” when regulations are actually being decided.

InfluenceMap highlighted areas of policy engagement by industry groups representing the ‘real economy’. The NGO said that broad industry bodies, such as BusinessEurope and EuropeanIssuers, were focused on opposing proposals relating to the green taxonomy and non-financial corporate reporting, while sector-specific groups, including the International Association of Oil and Gas Producers and FuelsEurope, had lobbied to weaken green revenue thresholds.

According to InfluenceMap, its report is based on more than 2,000 articles of evidence across 83 entities which were used to derive metrics on how actively an organisation had engaged with the Action Plan, and the degree of support or opposition. The NGO said it had “consulted extensively” with the groups and organisations named in the report.

French asset manager BNP Paribas, which was praised by InfluenceMap for its positive lobbying efforts, has reaffirmed its commitment to “constructive and positive engagement” on the EU action plan in response to the report’s publication.

In conjunction with the report, InfluenceMap will also launch an online platform to track future industry engagement with European sustainable finance policy.

The report comes as the European Commission is deciding its approach for the second phase of its Action Plan, known as the Renewed Strategy, with proposals due by the end of the year.

BNY Mellon has made the following statement regarding the report's claims:

“While we can’t speak to the methodology of the report, BNY Mellon will continue to support regulation that helps to ensure quality, consistency and clarity around sustainable finance. We have engaged publicly with EU ESG regulation, including our response to the European Commission Renewed Sustainable Finance Strategy, the consultation on the review of the Non-Financial Reporting Directive, and our public participation in the Capital Markets Unit High Level Forum.”