BlackRock, the world’s largest asset manager, is seeking to block a shareholder resolution on its corporate purpose commitments just days after its CEO and Chair, Larry Fink, highlighting the issue as “pivotal to creating durable value” in his influential annual letter to companies.

“The more your company can show its purpose in delivering value to its customers, its employees, and its communities, the better able you will be to compete and deliver long-term, durable profits for shareholders”, Fink wrote in his epistle to the market on Tuesday.

But the investment behemoth is simultaneously attempting to exclude a shareholder proposal asking it to report on how it will meet the commitments Fink signed up to in 2019 when he backed the Business Roundtable’s Statement on the Purpose of a Corporation. The statement by the US association of CEOs advocates a break with the traditional shareholder primacy model of capitalism – famously attributed to Milton Friedman – towards one in which all stakeholders are considered.

The resolution, filed by US non-profit As You Sow, asks BlackRock for “the board’s perspective” on how its “governance and management systems should be altered, if at all, to fully implement the New Statement of Purpose”.

Last year, BlackRock unsuccessfully attempted to block the same proposal, also filed by As You Sow, which went on to achieve just 3.9% shareholder support at the company’s annual meeting in May.

In this year’s ‘no-action’ request to US regulator the Securities and Exchange Commission (SEC), BlackRock argues that the proposal should be excluded on the grounds that it has already been “substantially implemented” and because the proposal “deals with matters relating to BlackRock’s ordinary business operations”.

The ‘no-action’ process is the mechanism whereby companies seek assurances from the SEC that action will not be taken if they omit a proposal – although the regulator’s opinion is informal and non-binding.

BlackRock states in its SEC letter, dated 22 January, there “is virtually no difference between the principles espoused in the BRT Statement and those to which BlackRock already adheres”.

Included in BlackRock’s filing is a table demonstrating how it believes it has met each of the BRT principles, which includes the pledge to “protect the environment by embracing sustainable practices across our businesses”. 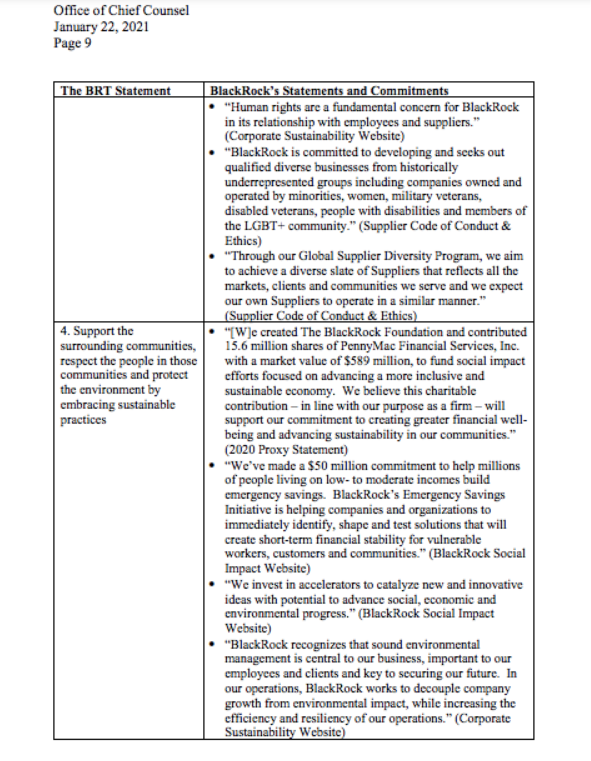 Earlier this month, Blackrock’s 2020 coal policy was criticised by NGOs that claimed that the firm still has $85bn invested in coal firms.

Blackrock was also found to have supported just 11% of climate proposals in the last proxy season by campaign group ShareAction, despite it joining influential shareholder engagement network Climate Action 100+ (CA100+).

A spokesperson for Blackrock told RI: “Our purpose is deeply embedded into the way BlackRock operates, and therefore already consistent with the BRT Statement”.  She also pointed to the firm’s recent ‘Where We Stand’ report, which “showcases many examples” of how it puts “our clients’ capital to work to contribute to a more resilient economy that benefits more people.”