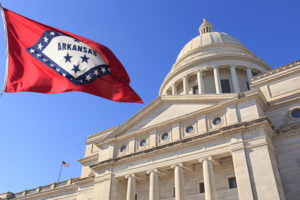 BlackRock has pushed back against a letter to its CEO Larry Fink, in which a senator of Arkansas challenged the firm’s involvement in Climate Action 100+.

The letter from senator Tom Cotton, sent this week, suggests that the influential investor network may “violate antitrust law” by mobilising shareholders to act in concert in a bid to influence the financial markets and companies.

Launched in 2017, the $60 trillion initiative co-ordinates investors’ stewardship efforts with the world’s biggest emitters – asking them to improve disclosure and realign their business models with the climate transition. Specifically, its members want companies to implement a strong climate governance framework, reduce greenhouse gas emissions and report against the recommendations of the Taskforce for Climate-related Financial Disclosures.

But Cotton told BlackRock that the group’s “anti-drilling coercion threatens our national security, hurts Americans struggling to buy a tank of gas, and appears to violate antitrust laws”.

“Specifically, by engaging with competing ‘focus companies,’ CA100+ investor participants appear to be running a spoke-and-hub conspiracy to restrict the supply of fossil fuels and impose various other unlawful restraints on trade. By ‘collaborating’ with other investors, you and your fellow CA100+ investor participants appear to be acting like a climate cartel.”

It is unclear whether Cotton plans to send similar letters to other investors. His office had not responded to a request for information at the time of publication.

In response to the letter, a BlackRock spokesperson told Responsible Investor: “BlackRock joined Climate Action 100+ to participate in dialogue with companies and financial institutions on matters important to our clients. As we made clear to CA100+ when we joined, BlackRock acts independently in its investment decisions. We do not co-ordinate investment decisions with any members of Climate Action 100+, and we do not buy, sell, hold or vote our shares together with any Climate Action 100+ signatory. As fiduciaries to our clients, we consistently prioritise the long-term economic interests of our clients above any commitments or pledges not required by law.”

There has been a tug of war over the role of CA100+ in influencing its members’ votes since it was founded in 2017. Arizona’s attorney general Mark Brnovich is currently investigating the initiative as part of a wider assessment of the ESG investing practices of major firms.

In contrast, campaign groups have argued that the network puts too little pressure on its signatories to act in alignment with its objectives. For example, many investors do not support climate-related shareholder proposals at focus companies, despite flaunting their membership of the group as a sign of their sustainability credentials.

Speaking to RI in 2020, Anne Simpson, the former managing investment director of US pension CalPERS, who helped set up CA100+, said: “It’s a question that gets asked a lot – why don’t you require everyone to vote in one direction? But we have to strike a very delicate balance between all this collective action and allowing each signatory to operate as an independent fiduciary, because otherwise we risk becoming a ‘group’.

“If we were a lot smaller, we could have gone for the ‘small but mighty’ approach and agreed to a whole load of detailed outcomes ahead of time. But once you’re at the size we are now, you have to be absolutely clear that, legally, decisions and actions are being taken by each fiduciary individually.”

She explained that CalPERS had used the US regulatory system to issue ‘proxy solicitations’, which ask other shareholders to vote in favour of resolutions that were aligned with CA100+’s goals, “but you can’t just go around willy-nilly telling people ‘we think you ought to do this and that’”.

In his letter, Cotton requested answers from Fink on whether BlackRock had engaged with any focus companies as part of CA100+ and whether it had collaborated with any other members as part of the initiative. BlackRock was asked to list details of which companies and investors, if so, by 20 July.

According to BlackRock’s Investment Stewardship Annual Report January 1 – December 31, 2020, it “was the lead investor in the engagements with China Steel – a Taiwanese mining and metal company in CA100+’s focus universe – and undertook certain meetings together with a local CA100+ member, Cathay Life, to encourage the company to enhance its climate disclosures and to pursue more ambitious targets and investment plans to transition its business in line with a lower than 2C scenario”.

The report states that “all signatories to Climate Action 100+ are independent fiduciaries and vote in accordance with their own voting principles and independent internal investment analysis”.

At the time of publication, BlackRock had not confirmed if it was still the lead investor on China Steel, nor whether the asset manager would be responding to the letter.

Cotton’s letter comes amid growing backlash against sustainable finance considerations in the US. This week Reuters reported that Goldman Sachs and Morgan Stanley had defended their position on fossil fuels in the face of pressure from West Virginia treasurer Riley Moore – citing criticism from NGOs as evidence that they are still heavily invested in the industry.

Last month, Moore put the pair ‘on notice’, alongside BlackRock, JPMorgan Chase, US Bancorp and Wells Fargo, in response to a new law allowing state treasurer’s in the US to add firms to a “Restricted Financial Institution List” if they are perceived to have scaled back their business relationships with fossil fuel companies “without a reasonable business purpose”.

According to documents provided to Reuters under a public records request, in a 6 July letter to Moore, Morgan Stanley chief legal officer Eric Grossman said the bank does not penalise fossil fuel companies, noting that it was labelled one of the “Dirty Dozen” top fossil fuel financiers in a report by the Rainforest Action Network.

“In considering this report, we believe that one could not conclude that Morgan Stanley is engaging in a ‘boycott of energy companies’,” Grossman was reported to have written.

A spokesperson for Morgan Stanley declined to comment on the article.

Reuters said that the following day, Goldman’s managing director, Beverly O’Toole, flagged its inclusion in the same report in its response to Moore.

In response, a spokesperson for Moore told RI: “Since we are in the final evaluation phase for our list, we can’t yet speak publicly about the documents submitted as part of the process. We’ll likely have the list out during the final week of July, at which point the Treasurer will be able to comment further on specific company claims and his response to them.”