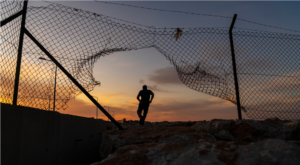 As global migration expands, spurred by climate change, conflicts, instability and poverty, investors must engage with companies and governments to support human rights-based governance of people crossing borders in search of safety and security.

The present approach by governments of devolving border surveillance and security to private technology and security firms to monitor, pushback, detain and return migrants is ripe with the potential for human rights abuses as the news reminds us daily. Moreover, it poses reputational and legal risks for investors in these companies. PRI signatories and other investors committed to respecting human rights and supporting robust public policy responses to climate change have a vital role to play in reframing public narratives on global migration.

These two straightforward requests would be a good start for investors to communicate their expectations as standard in the jurisdictions where the company is politically active and engaged in the financing of lobbying by industry and trade associations. They should engage governments about the terms under which they devolve their sovereign powers to the private sector. There are no social or economic benefits when migrants suffer human rights abuses and injustices. Our new discussion note provides a laundry list of action investors can take to change the status quo and stand up for migrant rights and international law.

Figure: The Border and Surveillance Industries cover a range of service providers which means developing a systematic stewardship strategy requires a clear plan for all major asset classes.

A recent TNI report highlights how the G7 countries, with the highest historic CO2 emissions, are busy fortifying their borders.

The TNI report highlights how seven of the largest GHG emitting countries – the United States, Germany, Japan, the United Kingdom, Canada, France and Australia – have collectively spent at least twice as much on border and immigration enforcement (more than $33.1 billion) as on climate finance ($14.4 billion) between 2013 and 2018.

However, countries in the global South, with the lowest historical CO2 emissions are hardest hit by population displacement arising from extreme weather and associated climate change impacts.

As discussed in our new note, migration linked to climate change is likely to increase significantly this decade. Investing in militarised borders and private security is not going to block this global trend. Investors must acknowledge this and stand up for a more systematic response to global migration in response to worsening climate impacts.

The militarisation and hardening of borders is linked in part to national climate security strategies that frame migrants as ‘security threats’ rather than as people seeking safety and security. For example, the US Department of Homeland Security's 2021 climate change strategy notes how “an influx of climate-related migration through the U.S.-Mexico border and climate-induced existential threats to Arctic communities and Alaska Native culture will accelerate and require our proactive actions to manage future border crises.” In the UK, the UNHCR reports that the government’s proposed Nationality and Borders Bill would severely limit the rights of individuals to seek asylum, including by restricting access to the UK territory, failing to effectively protect against direct and indirect refoulement, discriminating against certain categories of refugees, and criminalising individuals simply for seeking asylum. The UK government has also sought to follow the Australian model of offshoring refugees in internment camps run by private prison contractors. Border and surveillance industry companies have helped promote these processes through political influence and lobbying, growing the scope of the private border industry. This reframing has also focused on the creation of increasingly hostile policy environments for refugees and migrants in the US, UK, Australia, Canada, in the EU, and other receiving countries.

UNHCR notes that the number of refugees under its mandate has doubled between 2012 and 2019 to reach 26 million, out of a total global migrant population surpassing 270 million people. Within this larger group, around 82 million people were identified as forcibly displaced at the end of 2020 as a result of persecution, conflict, violence, human rights violations or events seriously disturbing public order. Investors are well aware that climate change and geopolitical instability will continue to make migration a central theme and will accelerate the privatisation of border security, prisons, and refugee policy.

Faced with the challenge of engaging with a globally significant and growing industry, investors must first consider the wider picture of border hardening. Pension funds and insurance companies with longer investment time horizons should explain that migration is required to support G7 economic growth and social stability, particularly in countries with rapidly aging populations. G7 governments should focus on opening up more formal migration pathways and investing in the social infrastructure required to rapidly integrate refugees and other arriving migrants into the labour force. Alongside updating approaches to migrant treatment and public narratives, global investors can help deliver enhanced climate finance to mitigate the impacts of climate change and help countries adapt to this reality, including supporting people who need to relocate or to migrate abroad.

Investors should push back against border militarisation & climate security narratives

Top border contractors explicitly recognize the potential to increase their revenue from climate change. Raytheon reports to CDP that ‘demand for its military products and services as security concerns may arise as results of droughts, floods, and storm events occur as a result of climate change’. Cobham, a British company, acquired by US private equity firm, Advent International, expects ‘changes to countries [sic] resources and habitability could increase the need for border surveillance due to population migration’.

Treating migration positively requires a change of direction and greatly increased climate finance, good public policy and international cooperation. Most importantly it is the only morally just path to support those suffering a crisis they played no part in creating.

Jerome Tagger is the CEO of Preventable Surprises. Investors interested in joining a global dialogue on stewardship responses to migrant rights abuse in the Border & Surveillance Industries can register their interest here.