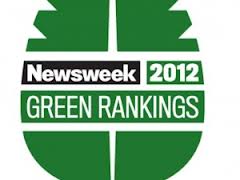 Santander Brasil, the Brazilian arm of the Spanish bank, has come top in the latest Newsweek Green Rankings.
Indian IT firm Wipro was ranked second and fellow Brazilian bank Banco Bradesco was ranked third.
“The Newsweek Green Rankings cut through the green chatter and compare the actual environmental footprints, management (policies, programs, initiatives, controversies), and reporting practices of big companies,” the publication says.
The top ten was rounded out by IBM, National Australia Bank, BT Group, Munich Re, SAP, KPN and Marks & Spencer Group.
The rankings focus on the largest listed companies in the US and worldwide and are compiled with the aid of environmental, social and governance (ESG) research firms Sustainalytics and Trucost.
Santander Brasil had a Newsweek ‘green score’ of 85.7 and the magazine said the firm “requires prospective clients to complete a questionnaire about their environmental practices” and guides them toward more sustainable practices before approving loans or lines of credit.Wipro (85.4) plans to convert five of its campuses into “biodiversity zones” by 2015. Bradesco (83.7) has started a non-profit arm that conserves 10m hectares in the Amazonian rainforest. It has also given over $50m to plant more than 30 million trees in the Atlantic Forest.
The rankings found that 20% more of the world’s largest companies reported on their environmental performance in 2012 than in 2011. More than 85% of companies in the rankings now disclose some level of detail on their environmental information.

“By improving the transparency on their environmental performance, companies are becoming more responsible for its improvement,” said James Salo, Senior Vice President, Strategy and Research at Trucost.

“This is an important step towards reducing environmental impact and risk.”

A feature of the rankings is that disclosure by emerging markets companies increased by approximately 8%.

The launch of the rankings comes just days after Newsweek announced it would cease publication of its print edition.