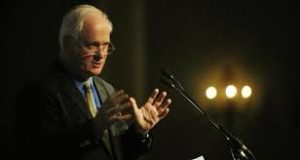 John Bruton, the former Irish Taoiseach (Prime Minister) and Minister of Finance, has told one of the biggest gatherings of pension funds in Europe that they need to focus on the problem of climate change and have an obligation to mitigate the potential risks on behalf of their members.

Speaking at the IPE Awards Conference in Vienna yesterday (November 20), which brings together more than 600 investors, a large part of whom are asset owners, Bruton, also a former EU ambassador to the US, pointedly opened his speech with the climate change comments, saying it was an issue that could impact on investment returns over time: “Pension funds have an obligation to mitigate the effects by measuring climate risks and opportunities and looking at low carbon investment solutions.”

He commended PensionDanmark, the DKK175bn pension scheme for blue-collar workers in Denmark’s construction and transportation sectors, which has allocated 10% of its assets to climate related investments and renewables: “Focusing on the long-term risk is the right thing to do.”

Asked by Responsible Investor what pension funds could do about climate change in the absence of a clear regulatory framework and stronger carbon pricing/policy signals, Bruton said he was not in favour of a regulatory approach to making pension funds act.

However, he said that climate change could threaten the ultimate viability of pension schemes: “We don’t know when something bad like ‘the big flood’ will happen, but that doesn’t mean it won’t because the current use of fossil fuels is unsustainable. As I’ve mentioned, trustees should be identifying the risks and opportunities and acting accordingly, but it us up to trustees to do so.”

On a separate panel, titled ‘Stranded assets and other related climate risks: Are we sleepwalking into the nextsystemic crisis?’ Torben Möger Pedersen, CEO at PensionDanmark, explained that its 10% allocation to direct renewable energy infrastructure offered attractive risk adjusted returns that cleared its investment due diligence and which also enabled it to support the climate change agenda and provide its members with good pensions and cost-effective green power. It’s clearly doing something right: the fund took home the coveted Best European Pension Fund award.

Panel moderator, Dr Raj Thamotheram, CEO of Preventable Surprises, polled the audience asking whether it believed the warnings about heading to a 4 degrees warmer climate, to which 64% replied yes. In a follow up question, 54% said they thought investors were badly prepared for the financial outcomes of such a climate change.

Pascal Blanqué, CIO and Deputy CEO at Amundi Asset Management, said there was a relatively high probability that many of the risks talked about around carbon exposure would materialise. These investment risks, he said, were “idiosyncratic, unrewarded and unevenly distributed amongst companies.” However, he said they could be managed like other risk factors such as value, size and volatility in a multi-factor risk approach, and that investors could earn money from managing the idiosyncratic nature of the risk exposure.

He noted that Amundi had worked with pension funds including Swedish state fund Fjärde AP-fonden (AP4) and France’s Fonds de réserve pour les retraites (FRR) to back a new suite of low carbon indices from MSCI with substantial seed financing of up to €1bn.

The Global Low Carbon Leaders Indexes – which comprise companies with lower carbon exposure than the broad market – are, he said, being used by Amundi to create a series of low carbon index tracking products.