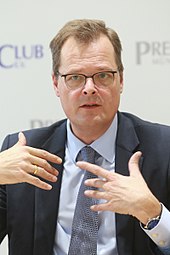 A Member of the Board of Germany’s central bank has warned policymakers that now is not the right time for “hard intervention” on green investment.
Speaking at an event on the topic last week, hosted by the German arm of the European Commission in Berlin, Joachim Wuermeling said the Deutsche Bundesbank saw climate change as an important issue for central banks, because of its links with financial stability. He added that the bank saw green finance as having great potential.
“The plant is really growing well, so at this very premature stage of the market, we need to consider which instruments will make the plant grow more. And it is not the time where hard intervention by the legislator is the right instrument.”
He said that the focus should instead be on creating interest in the topic and looking at bottlenecks and legal obstacles, “which are there, and are very well identified by the High Level Expert Group on Sustainable Finance”.

The comments were made in the context of proposals being put forward by the European Commission to introduce capital requirement changes for investments into ‘sustainable’ assets, and calls from many in the market for a parallel initiative to penalise banks and insurance companies for financing fossil-fuel projects.The Commission will also make a legislative proposal in the spring to create a classification system around eligible green and social projects.

The animal we’re dealing with is a market.

Wuermeling, who has responsibility for markets section at the bank, said the Bundesbank supported the proposals to create an EU-level taxonomy of sustainable projects, but only if it “is not regulation, but explanation”. Any taxonomy must not “prescribe or impose judgement,” he insisted. “It should only give an explanation of… what measures are able to support the transformation, to make the investment easier”.