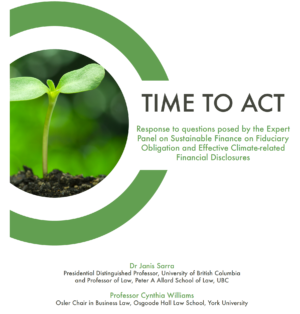 There’s been a call for Canada’s pension laws to be amended to boost pension funds’ environmental, social and governance (ESG) credentials.

In the context of the government-backed Expert Panel on Sustainable Finance, the new report says the federal government should amend the Canada Pension Plan Investment Board Act, the 1997 act which founded CPPIB as a Canadian Crown corporation, to align the fiduciary duty provisions with proposed amendments to the Canada Business Corporations Act (CBCA).

The call comes in Time to Act, ‘Response to questions posed by the Expert Panel on Sustainable Finance on Fiduciary Obligation and Effective Climate-related Financial Disclosures’. It was written by Dr Janis Sarra of the University of British Columbia and Professor Cynthia Williams of York University.

They note that CPPIB, which invests on behalf of 20m Canadian contributors and beneficiaries and which has assets of C$368.5bn (€246bn), is already committed to ESG in its public statements.

CPPIB – which declined to comment for this report – has spoken in the past that as a “significant long-term investor we believe we can have a powerful influence on the companies in which we invest”.

“We seek to create change from the inside by engaging with numerous Canadian and global companies that are high emitters of greenhouse gas emissions.”Sarra and Williams, who are the Canadian principal investigators in the global Commonwealth Climate and Law Initiative (CCLI), argue that codifying this “would make that fiduciary obligation transparent to all Canadian stakeholders”.

For example, Recommendation 5: is for the Pension Benefits Standards Regulations to be amended to specify that ESG factors must be considered and incorporated in the Statement of Investment Policies and Procedures (SIPP).

The report, which endorses the TCFD framework, aims to be a “practical guide for policymakers”.

It comes as Toronto-based OPTrust, which runs the C$20bn OPSEU Pension Plan, the plan for Ontario government employees, has released the results of its “climate-savvy” asset liability management/strategic asset allocation (ALM/SAA) project in partnership with Ortec Finance, the Netherlands-based consultant.

Among its eight key findings is that there’s “no silver bullet when managing climate-related financial risks”.

In other news, Canada’s Responsible Investment Association (RIA) has said that impact investing has grown to C$14.75bn – from C$8.15bn at the end of 2015. That’s 81% growth over two years, according to its latest trends report.