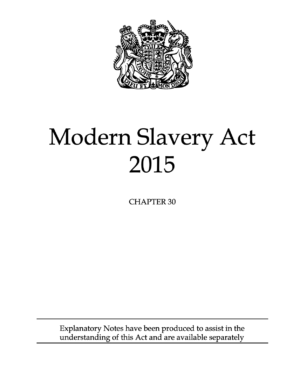 Investor calls for a “centralised, state-supported repository” for UK companies’ modern slavery statements have been picked up in a UK government-commissioned review of its 2015 landmark Modern Slavery Act.
It comes as the government says it has written to 17,000 companies warning of non-compliance with the Act.
The Church Investors Group (CIG), which represents £21bn in assets on behalf of church pension funds and charities, and charity fund manager CCLA had called for such a “repository” in their 2018 submission to the Home Affairs Committee into modern slavery.
They argued that a government hosted database would improve compliance, make engagement with laggard companies easier, and “send a clear message to companies about the mandatory status of their statements”.
That recommendation has now been included in a review of the Act released last week, with the added proviso that such a database, to which companies would be “required” to upload their statements, should also be “easily accessible to the public, free of charge”.
The government-backed review is being led by former Welfare Reform Minister Frank Fields and includes Conservative MP Maria Miller and former senior judge Baroness Butler-Sloss.
The UK’s Modern Slavery Act, which was one of the first pieces of legislation in the world to specifically address slavery and trafficking in the 21st century, requires companies operating in the UK with a turnover of £36m (€41.5m) or more to report on how they prevent slavery in their operations and supply chains.
But in its second interim report, which focuses on transparency in supply chains, the review committee described the impact of the government’s pioneering legislation as “limited”.
Fields told Responsible Investor: “The UK set a kitemark with our original modern slavery legislation but we’re now falling behind.”
When the Act was introduced it was clear that it was up to investors and others to monitor companies’ compliance with it.
But the review says this is “not sufficient” and calls for the government to take “tougher action”.
James Corah, Head of Ethical and Responsible Investment at CCLA, which also acts as secretariat for CIG, told RI that “overall” the CIG was “supportive of the review”.He described modern slavery as a “priority” engagement topic for CCLA, adding: “We need companies to start providing more data about what have they found [on slavery in supply chains] and what processes are they implementing.”
CCLA was part of a £817bn investor coalition – spearheaded by Rathbone Greenbank – that engaged with six unnamed FTSE100 companies over fears that they were not adhering to the legislation.
Matt Crossman, Stewardship Director at Rathbones and Engagement Manager at its Rathbone Greenbank arm, described the Act positively as “innovatively combining elements of the carrot and the stick”.
But he added: “Our issue with the implementation of the Modern Slavery Act (MSA) has been the fact that the government has not issued a definitive list of who has to comply… It’s hard to judge someone on their performance in a race when we don’t even know who should be competing.
“We need regulators to step up and give the MSA the chance it needs to succeed – there is willingness from investors to move things forward when the rules are clearly set out.”
The creation of a list of companies that fall under the legislation is included among the review’s recommendations, along with:
The removal of the clause that allows companies to state that they are taking no steps to address modern slavery.
The ramping up of the ‘explain’ requirement where companies believe that the legislation does not apply to them.
That the Act be amended to impose a similar duty on “non-listed companies” that meet the £36m threshold.
That businesses should be required to have a designated board member who is personally accountable for the production of their slavery statement.
And, that failure to fulfil the reporting requirements be an offence under the Company Directors Disqualification Act 1986.
Fields said he expects the government to “give serious consideration to these common-sense proposals”.
A spokesperson from the Home Office (interior ministry) said: “It is clear that while some companies are leading the way others are falling behind and in October 2018 the Home Office wrote to the CEOs of 17,000 businesses making it clear that there are no excuses for non-compliance.”
The ministry would consider the report’s recommendations “carefully” and respond after the final report is published.
The review’s final report is expected in March.