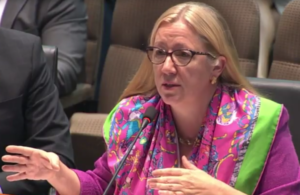 The California Public Employees Retirement System (CalPERS) says it plans to introduce the Global Climate 100 Initiative – a groundbreaking worldwide asset owner climate engagement plan – alongside other investors at the Principles for Responsible Investment’s annual conference in Berlin next month.

It will then launch it to the public at the COP23 United Nations climate talks in Bonn in November.

The investors are putting the finishing touches to a memorandum of understanding that will govern the initiative, Anne Simpson, Investment Director, Sustainability, told the fund’s Investment Committee meeting last week.

The idea grew from a carbon footprinting exercise 18 months ago where CalPERS found that 80 companies were responsible for about 50% of portfolio emissions. It realized that other large investors have similar portfolios with similar concentrations, so the idea was to “see if we can team up and work collaboratively”.

There has been a lot of interest, Simpson said, not just from investors but networks like Ceres, the global investor climate networks and the PRI.

She said it means that “globally, as an alliance, we can ask the same things of these companies, and really bring our collective influence to bear”.The memorandum is a governing document about participants’ division of labor; the idea is to follow local investors on the issue in their own market, who will take the lead on the engagement. Confidentiality is a key aspect, she said.

She went on: “We’ve decided there should be a steering committee, which each of their regional networks will have their staff member on.” Each region will nominate an asset owner or an asset manager – CalPERS has volunteered to be the investor for the US.

“And also we’re working out how we can connect very deeply with the PRI which covers many of the markets that these regional networks don’t, for example Russia, India, Brazil. That has been a lot of delicate negotiation.” There was due to be a final planning call last week; the aim is to “mobilise the PRI network”.

“We’ve got the Paris agreement which is the global policy framework, now we need an initiative which brings in the financial markets,” Simpson said.

“This has never been tried before, there’s never been an effort to organize investors around a common engagement strategy.” Both Simpson and board member Priya Mathur are both scheduled to speak at PRI in Person.