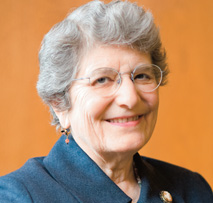 Former Securities and Exchange Commissioner and New York Stock Exchange director Roberta Karmel says she fears the capital markets will become the “province of fraudsters” under a Donald Trump presidency.

Karmel, the first ever female SEC Commissioner, was speaking at the American Bar Association in what amounts to a wide-ranging plea for the independence of the SEC.

She told the audience that she initially drafted her speech expecting Hillary Clinton to become President and face gridlock with a Republican Congress.

“Instead I believe we are going to witness something worse—an Administration that wants to build walls of ignorance and bigotry and retreat into isolationism in order to return to the 1950s,” Karmel said.

“I fear the Trump Administration will deregulate the capital markets so that they become the province of fraudsters and fail to raise and allocate capital properly.”

She went on: “I am very afraid that the Trump Administration and the Republican Congress will try to destroy the SEC, or in any event, the SEC’s independence.”

She said the Obama period has given rise to a “poisonous partisanship” that threatens both the agency’s independence and effectiveness – and that regulatory expertise is not valued.Karmel, who was appointed to the SEC by President Carter in 1977, singled out the Dodd-Frank Act as a mostly “serious and worthwhile response” to 2008’s financial meltdown that was hindered by partisanship.

Section 1502, relating to conflict minerals from the Democratic Republic of Congo, was an example of a provision that forced the SEC to “wade into political quagmires” that Karmel said had little to do with investor protection.

Repealing Dodd-Frank would be a “terrible mistake” though it could benefit from a bi-partisan correction bill, Karmel said in a speech that ranged from Nixon and Watergate to Senator Elizabeth Warren calling for the resignation of current SEC Chair Mary Jo White.

Given the political pressure on the SEC, Karmel called for independent funding for the agency.

Karmel is the author of Life at the Center: Reflections on Fifty Years of Securities Regulation and Regulation by Prosecution: The Securities and Exchange Commission Versus Corporate America.