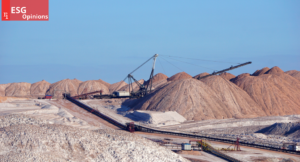 The International Energy Agency’s (IEA) latest piece on the minerals critical to the energy transition gives a rather pessimistic spin on what was some very positive data. Looked at from a wider perspective, the note provides another useful source of analytical support for the energy transition.

The IEA looked into the amount of minerals needed to fuel the energy transition, and pretty quickly worked out “there is no shortage of resources”. The world has plenty of lithium, nickel, rare earth metals and so on. This is what the US Geological survey has been saying for a while, and fits with the work done by the Energy Transitions Commission on mineral availability.

The IEA notes, for example, that we have 170 times as much lithium reserves as annual demand, and that our lithium reserves have increased by 42% over the last eight years as higher prices and the prospect of rising demand have drawn out new investment. Under the IEA’s 1.5℃ scenario, we will need about twice the amount of critical minerals by 2040 (six times as much for the clean energy industry, but that is only part of global demand), and the IEA put forward a series of sensible suggestions – increase recycling, invest in new supply and so on – to ensure that we get it.

However, their take then turns gloomier as we are warned about how hard this is going to be. Impressive charts show that the average electric vehicle uses 210kg of critical minerals compared to only 35kg for an ICE car, and that a MW of solar generation capacity needs 6.5 tonnes of critical minerals compared to a coal plant which needs only three tonnes. We are then encouraged to think about all the ESG issues and environmental issues associated with the surge in mineral usage and to worry about supplier concentration, water usage, pollution and depletion.

Take those 6.5 tonnes that you need to build 1MW of solar capacity. It turns out that this is an absolutely immaterial number compared to the weight of the coal that is used to generate electricity

Stand back a moment however, and you can see immediately that the IEA are very selective in their presentation of the data. They look only at the stocks (the assets you need to build the generator or car) not the flows (the energy you need to run them). But the flows of energy are 2-3 orders of magnitude larger than the stocks, and this means that many of their conclusions are more useful for fossil fuel advocates than for policymakers.

One way to demonstrate this is to look at the weight of the material that is required for a fossil fuel system versus a renewable system, as weight is a pretty good proxy for environmental impact. All that coal and oil has to be extracted and converted and shipped around, and at every stage it requires complex and heavy equipment which has an impact on communities and air quality.

Below, we take IEA data to compare the critical mineral requirement of the renewable system with the energy requirement of the fossil system, to get a more appropriate comparison. There are of course other materials like steel and cement to consider when building transition infrastructure, and other areas like transport networks, but it is safe to say that these will weigh considerably more for the heavy molecules of the fossil system than the light electrons of the renewable system.

For example, take those 6.5 tonnes (half of it from silicon, which is not exactly a rare mineral) that you need to build 1MW of solar capacity. It turns out that this is an absolutely immaterial number compared to the weight of the coal that is used to generate electricity. Over its lifetime of 30 years, 1MW of solar capacity will generate over 40,000  MWh of electricity, so the mineral requirement is just 0.15kg per MWh. Compare that to a coal fired generation station where the critical mineral requirement is indeed a bit less, but you need 350kg of coal to generate that MWh. Based on this calculation, coal generation will need more than 2,000 times more material by weight than solar generation.

It is a similar story in the transport sector. The average car uses about a tonne of oil a year, or 15 tonnes over its lifetime. Compare that with the 210kg of critical minerals that the EV needs, and the weight of the oil is 71 times higher than the weight of the minerals. You burn the oil only once, but the minerals can and will be recycled many times.

There is no denying that there will be production bottlenecks as demand for critical minerals rises, but this is nothing new for the mining sector. There are also some risks around producer and refinery concentration, but as the IEA also notes, “There are significant differences between oil security and mineral security. In the event of an oil supply crisis, all consumers driving gasoline cars or diesel trucks are affected by higher prices. By contrast, a shortage or spike in the price of a mineral affects only the supply of new EVs or solar plants.”

But we must not forget the bigger story: we will need a lot less material and that means a much smaller environmental impact. Global demand for fossil fuels in 2019 was over 13,000 million tonnes (mt), and global demand for critical minerals in the renewable sector in 2020 was 7 mt. Under the IEA’s 1.5℃ scenario, demand for critical minerals in the renewable sector will rise to 43 mt in 2040. So, the fossil system requires over 300 times more material than the renewable system. The disparity is enormous and no amount of fancy footwork by apologists of the fossil fuel system should deflect us from the central point that we have the resources to make the energy transition a reality and to usher in a new age of growth and prosperity.

Kingsmill Bond is the Energy Strategist for Carbon Tracker. He has worked as a sell-side equity analyst and strategist for Deutsche Bank and Citibank.