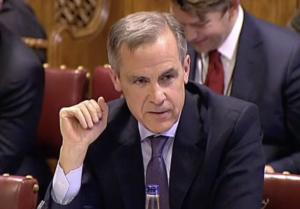 Bank of England Governor Mark Carney said he was “mystified” by a line of questioning on stranded assets from a climate sceptic member of the House of Lords, the upper house, at a Parliamentary committee session yesterday.

Carney was appearing in front of the House of Lords Economic Affairs Committee when he faced questioning from Lord Turnbull [the section on stranded assets begins from 16:27:39].

Turnbull said: “We’ve spoken in the past about ‘stranded assets’, which I think is a warning to investors who invest in assets of fossil fuels. I’m puzzled by this. The history of capitalism is littered with big innovations coming along and leaving assets stranded and leaving assets… stranded. Railways, canals, you could say half our high streets, telephone exchanges.

To which Carney responded: “It’s a judgment, you make a market in, whether it’s an oil refinery or a coal plant, nuclear facility – any form of energy. It’s a judgment about at what point, if any, there is a transition to a lower carbon economy based on price or non-price restrictions. At what point is the tipping point where that which was economic becomes uneconomic?”

Turnbull, a former senior civil servant and non-executive director at Prudential plc and British Land, is a Trustee of the Global Warming Policy Foundation. This is the UK lobby group founded by former Chancellor of the Exchequer Nigel Lawson that speaks of the “contested science of global warming” and which is “deeply concerned about the costs and other implications of many of the policies currently being advocated”.Carney went on: “Let’s make it tangible, OK? Because the market gets it right, the market gets it wrong on both sides of those equations. Looks like the market got it wrong on European diesel auto, OK? A huge amount of value destruction there… it’s one of the issues that has caused the European slowdown which is reverberating back on this economy. US coal – same thing. German utilities, same issue. Coastal real estate.

“Lord Turnbull, I’m slightly mystified by the line of questioning”

“If I own a clean coal plant in the US, will I see it out to the end of its economic life? I’m making a judgment on the carbon policy in the United States for the next 15, 20 years.

“The point is, there should be enough information to make those judgments. Institutions will take different sides of those calculations … that’s what makes a market.” He went on to say that there is an “inconsistency” between monetising carbon assets and achieving climate goals.

Turnbull then questioned Carney’s highlighting of stranded assets, which Carney disputed and invited his questioner to do a word search of his public utterances.

Looking momentarily nonplussed (16:33:50) as Turnbull persisted, Carney said: “Lord Turnbull, I’m slightly mystified by the line of questioning to be honest. We do look at a range of exposures, obviously. It is the case that certain exposures have not been historically ‘clocked’. Cyber-risk is an example.

“I wouldn’t say there’s some sort of witch-hunt on stranded assets.” He mentioned disruptive regulatory change, adding “we would want to know, for those financial institutions that we supervise, that they have thought about this. Everyone in the insurance sector does and the best of the banks do.”