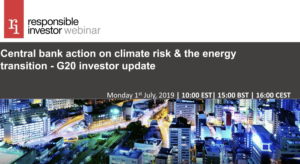 Speaking on a Responsible Investor webinar alongside officials from Germany’s Bundesbank and the Bank of England, Lacaille said surveys it had done on portfolio management of official institutions globally found central banks were more finely attuned to the financial risks of climate change.

“It is still unknown territory for many,” said Lacaille. “And in our mandates we are often trying to help central banks understand with the portfolio that they are managing how they can control those risks effectively as well.

“So not only do they have their policy mandate and also their macro prudential mandate, but within their portfolio there is a consistency that will seek to avoid or manage certain risks.”

He was speaking in the context of the growth of the Network for Greening the Financial System (NGFS) – the central bank and supervisors body focused on climate change.

The NGFS has three workstreams: micro-prudential and banking supervision, chaired by the People’s Bank of China; macro-financial aspects, chaired by the BoE; and scaling up green finance, chaired by the Bundesbank. The NGFS released its first report in April with six recommendations including bridging data gaps and developing a sustainable taxonomy.

Henner Asche, Deputy Director General, Markets, at the Bundesbank, said the NGFS’s next activities were “very ambitious but had high momentum”.

Asche said it would prepare a number of technical handbooks by 2020, including on climate and environmental-related risks management for supervisory authorities, and also one for financial institutions on the same subject. The NGFS will also prepare a handbook on incorporating sustainability criteria into central banks’ portfolio management and another on scenario based climate risks analysis.Talking in a personal capacity, Sini Matikainen, Senior Analyst at the BoE, said the NGFS would work on three to four high level scenarios for use by central bank supervisors to improve comparability with a common set of assumptions.

But Matikainen also stressed that the scenario analyses were “a starting point rather than the final word on the topic”.

She said: “As noted in the NGFS’s comprehensive report in April, financial firms shouldn’t be waiting for central banks or supervisors to develop some universal, perfect model of what these scenarios should look like, rather they should initiate their own structured analytical work and over time this analytical work can be more quantified and sophisticated. It is a beginning stage for discussions.”

During questions, Lacaille was asked about SSGA’s business model for a low-carbon transition.

He said that it advocated low-carbon indices, and that while it had clients in Northern Europe and Asia with strong views on the issues, they were still in a minority. “We’ve advocated for it because we think it has a good long-term value creation. It will be a long time before that becomes standard.”

Another question focused on the risk of non-cooperation of central banks. Matikainen said that the strength of the NGFS is that it is a coalition of developed and developing countries, including Thailand and Morocco. She said it could provide a platform for enhanced multi-lateral cooperation on the topic of climate change.

The NGFS has around 36 members and six observers, including most recently the Basel Committee on Banking Supervision.

The US Federal Reserve Board is notably absent from the NGFS amid political pressure on the issue of climate change.

But some regional Federal Reserve Banks, including San Francisco and, recently, Dallas have made public comments on climate change and financial risk.

However, RI understands that a March research note from the San Francisco Fed drew pressure from Washington as it was seen as too political.