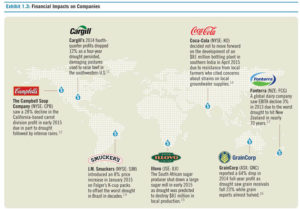 Bring global investor leaders together in drought-stricken California and you’re bound to get lots of ideas for dealing with it.

Citing weak pricing signals, poor accounting and ageing infrastructure, investors, businesses and policymakers offered sweeping changes for tackling the state’s water crisis, which they attribute as much on “market failure” as a lack of rainfall. And they also made clear that California’s water challenges are not unique; it’s a growing problem worldwide.

Klop said the California drought is only the latest reason why investors are increasingly seeing global water scarcity as a material issue in their portfolios. More than ever, investors are trying to understand how localized water risks – whether in California, Brazil or China – will ripple through their investments, whether in water utility bonds or food company stocks.

“All of a sudden, these geographic impacts are starting to happen,” Klop said, citing a 2012 drought in India that caused massive power outages that crippled the economy.

In the case of Breckinridge Capital Advisors, which manages $21bn of fixed-income portfolios, the challenge is understanding how thousands of U.S. water utilities are exposed to water risks. “We own bonds in more than 200 utilities in Texas and California alone,” said Kevin Lehman, a Breckinridge credit analyst.

Breckinridge uses 11 indicators to analyze how water availability, demand and oversight can affect a utility’s ability to repay its bond debt. As a result of this process, it downgraded a handful of water utilities in water-constrained Texas last year.In terms of managing the California drought itself, speakers suggested that the state do a better job on key fundamentals like stronger water pricing and better water use information:

• Let’s start with measurement. Much of California’s water use isn’t being measured, especially when it comes to withdrawals from groundwater basins, which provided more than half of the state’s total water supplies last year. There’s also little information on how much stormwater and urban and agricultural runoff is being “wasted” instead of being captured and re-used. Without a better understanding of how much water is available and who is using it, managing the state’s water challenges will be daunting.

• Compared to countries like Denmark and Germany, Californians are paying astonishingly little for their water, even in regions where supplies are most tight. “Water is too cheap … we’re essentially mining it,” said Miles Reiter, CEO of national berry giant Driscoll’s, referring to groundwater. And pricing is also wildly inconsistent among different users, with farmers typically paying the lowest. As a result of patchwork quilt pricing and byzantine water ownership rights, flexible water trading that would enable more efficient water use is all but impossible.

• The state’s water system is also being short-changed, particularly in regard to sufficient investments in green water infrastructure, such as stormwater recharge basins and water recycling. Vast amounts of stormwater are now being funneled into the Pacific Ocean every time it rains. While the state’s recent $7.5 billion water bond will help finance some of these types of projects, all agreed it’s not nearly enough.

“What’s the cost of building a resilient water system (for California)? Let’s pay for that,” said Jason Morrison, program director at the Pacific Institute.

As Morrison noted, the business community, including members of Ceres’ Connect the Drops campaign, has a key role to play in driving the discussion on the importance of resilient, sustainable water supplies for California’s future. Investors, who have a direct stake in the state’s economy, have an important role, too.

Brooke Barton is senior director of water programs at Ceres.