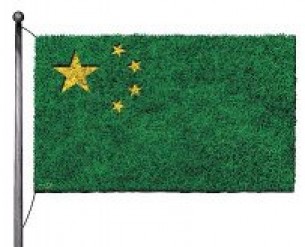 Investment into key green technology in China will need to be approximately RMB2.9 trillion (US$460 billion) per year from 2015 to 2020 to combat the country’s pollution problems, with about two thirds (RMB2.0 trillion annually: US$320 billion), coming from domestic and international investors, according to a wide-ranging report synthesising existing information on the Chinese market.
The report, titled Greening China’s Financial System is significant for its buy-in from the Chinese government. One of the research partners was The Development Research Center of the State Council (DRC) a leading Chinese policy research and consulting institution directly under the State Council. It says key investment priorities include clean energy, industrial energy conservation, building energy conservation, transport energy conservation, improvement of energy efficiency and environmental pollution control.
Environmental damage, especially air, land and water pollution, is posing significant risks to the China’s quality of life, economic competitiveness, resilience and long-term growth. The World Bank estimates it is costing the Chinese economy between 3-6% of GDP each year, and rising.
China became the world’s second largest economy in 2010, but has been the number one emitter of conventional pollutants since 2005, and by 2011 it was also the largest carbon dioxide emitter.
Chinese Premier Li Keqiang has committed to “resolutely declare war on pollution as we declared war against poverty”.
The report notes that the investment necessary for the green transition is considerable, but not when compared with the existing cost to China’s society and economy of its current environmental problems. It notes that given the country’s fiscal limitations and priorities, private financing will make up a large part of the investment. The report says “Green credit” has been the key policy to date for environmental finance in China’s banking-dominated system. In 2006 the China Industrial Bank together with the International Finance Corporation (IFC) established the first “green credit” product in China—a loan fund for energy conservation and emission reduction projects. Development of the green bond market in China is expected to be significant.A carbon market is also developing in the country. China’s emissions trading market has developed over the past 20 years from demonstration pilots in seven provinces and cities, including Shenzhen, Shanghai, Beijing, Guangdong, Tianjin, Hubei and Chongqing, to the setting up of broader systems and trading platforms. The report says commercial banks are moving into the country’s fledgling carbon markets, developing financial products to help clients hedge carbon risks and finance new investment using carbon certificates as collateral.
In addition, private equity and venture capital funds have gradually increased investment in green sectors including, renewable energy and clean technology.
The report proposes a green finance: Framework for Action for China, as follows:

A. Establish and strengthen legal frameworks – including environmental laws and law enforcement that contribute to the demand for green finance.
B. Improve coordination and information sharing between environmental, financial and industrial regulators and with third-party institutions
C. Develop comprehensive policy support for green finance (Align monetary policy with sustainable development goals, continue to strengthen green credit policies in banking, provide incentives to grow the market for green securities, including green bonds, expand the scope of green insurance and strengthen environmental liability insurance regulations, use fiscal incentives to accelerate the development of green finance markets.)
D. Foster the development of the information infrastructure with information on environmental costs and a green credit rating system.
E. Green the policy banks as leaders in establishing markets and best practices for commercial banks.

The other partners for the study were The International Institute for Sustainable Development (IISD) a Canadian-based, international public policy research institute for sustainable development, The Inquiry into the Design of a Sustainable Financial System initiated by the United Nations Environment Programme, and the Fridtjof Nansen Institute (FNI), Norway. The report’s authors are Zhang Chengui, Simon Nadek, Chen Ning and Mark Halle.