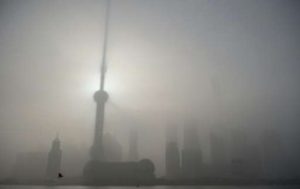 The number one concern in investment markets today is China’s economy slowing down. But for ESG investors there is even more at stake. The slowdown is causing some to question China’s commitment to combatting global warming, and the numbers behind their efforts. This is important. China is the frontier for climate change. And it looks like they might be failing.
Dyspeptic markets just need one bad number to send them reeling. This happened last week when China announced exports fell 20.7 % in February compared to a year earlier. Instead of a forecast trade surplus of $26 billion, it was just $4 billion. This came days after Li Keqiang, Premier of China’s State Council, announced China would target economic growth of (only) 6-6.5 % in 2019, a 28-year low.
There is mounting evidence of a ripple effect from a Chinese slowdown across the globe. In Korea, SK Hynix the world’s second largest chip maker reported a net profit shortfall of $358m for this reason. Prices of refined oil are plummeting taking margins at Singapore refineries down to just $1.30 a barrel. The Royal Bank of Australia is warning of sharply slower growth and higher unemployment thanks to China. In the States, Goldman Sachs last week warned its clients about a list of investments exposed to China – Qualcomm, Micron Technology, Broadcom, NVidia, Qorvo and Skyworks Solutions.
The export number and the Premier’s warning coming together in one week have frightened markets and are adding to the narrative (with China’s help) that President Trump is pushing too hard in his trade war and upsetting the global apple cart. We have to remember China welcomes any distraction from the accusations of intellectual property theft, and forced transfer of technology, which it is struggling to shake off.The Chinese are very adept at concealing what is actually going on. They hide behind a curtain of official numbers and worthy policies. As ever in markets, we need to stand back and get a better sense of the big picture. The answer may lie in a strange place – CO2 emissions. Take a look at the chart in the downloads column (left hand side of page). Several important points emerge.
Firstly, the Paris accord has been fully taken on board by the United States and Europe, and in the last ten years they have made significant reductions in emissions. If you weren’t aware before you should be now that China now emits more than the whole of Europe and the United States put together. In the West there is a misguided notion that it is all up to us – expounded for example by Senator Corey Booker who said just recently “the United States saved the World from Nazism, now we can do the same with climate change.” That is just out of date nonsense. In fact, it echoes an imperial arrogance of thought. The reality is the battle to save our planet is not in the West, it is in the East. Principally in China, but also India and the rather worryingly large “others” category.
Why exactly do we put up with China being so dirty? China’s economy is still less than a third of the size of Europe and the US combined and yet it now emits more CO2. We have allowed the Chinese to convince us this is somehow alright. Part of “industrialisation,” and temporary. How quaintly old-fashioned – clean technology has advanced enormously. And look at the Chinese line on this chart more carefully. Having risen dramatically, you will see that it levels off, stabilizes, and then has a kink up again, just recently. What is going on? The key may be coal. China tells us coal consumption is up only 1% in the last year. And yet the growth in coal production was 4.6%. As the authors of the Global

Carbon report say “In theory, the use of coal should equal the supply of coal….a slight gap between these figures is normal, but more than a fraction of a percent suggests data errors or biases.” Quite.
CoalSwarm (the California energy think-tank) have taken to analysing satellite imagery. They published a report just a few months ago listing all the coal fired power stations China is building. Apparently one a week. Adding an enormous 259 gigawatts of coal power capacity – equivalent to the entire United States. This is despite “official” government policies restricting new builds and is in direct contravention of the Paris accord. It also means that the kink up on the chart may actually get worse.
There is another kind of statistic that helps investors work out what is really going on – pollution numbers. WHO says China’s smog-choked air kills a million of its citizens every year. China last year had an official target to reduce pollution (as measured by PM2.5 levels) by 15%. This year it cut that target to a 3% reduction. Even that is being widely missed. The figures for January show air pollution in the 39 major Northern cities actually rose, by some 16%. Some are doing even worse. Steel and coal towns like Henan up 27%, and Shijiazhuang up 30%!
The real China story appears to run like this. From 2014-16 they made strong efforts to curb emissions, even if this affected economic growth. Li Keqiang talked of an“ecological civilisation”. This worked, but the economic slowdown in late 2015 made the Government nervous, and they flooded liquidity into the market. This has had an impact on emissions in the other direction. This makes for exquisite tension now between combatting climate change and ensuring continued economic growth. The Government talks “green.” The new Guidelines for Establishing a Green Financial System make it mandatory for listed companies to disclose environmental information by 2020. And in the last year, China has introduced a nationwide environmental damage compensation system. But one can’t get away from the suspicion that behind their “curtain,” it’s not happening.
What should we do about it? Well we should be more aware of the extent to which we have exported environmentally damaging activities to China. Take the production of polysilicon, vital in the solar power industry. The poisonous by-product is silicon tetrachloride. It is argued that with proper recycling silicon costs over $80,000 a tonne. Some of the Chinese “Green Start-ups” are making it for as little as $21,000. Are they dumping waste?
At the macro policy level, maybe it is time for Europe and the US to add a new kind of tariff; one which relates to environmental damage.
Linking tariffs to emissions. Now there’s an idea Mr. Trump for combatting the “Chinese hoax.”